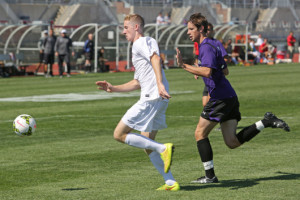 When we’re working on a certain technique or tactic it’s important that we focus solely on that aspect of play. In my last training session I presented a practice that focused on turning. Once I began to add pressure to the turning attacker I didn’t tell the defender HOW to pressure or make any corrections to what they were doing. I continued to focus on teaching the attacker to turn and beat the defender. I didn’t want to pull the player’s focus away from turning by trying to improve the defending.

I’ve found that following an attacking session with a defending session on the same topic is a great way to allow the players to work on attacking methods while focusing on teaching the defending topic.

For example, I’ll work with the players on fakes and moves to beat a player in one session and then come back later in the week and work on 1 v 1 defending.

I only coach the defending aspect in the second session but the attacking methods are fresh in their minds from the previous session so this gives them another opportunity to practice those techniques while I focus on the defending.

This also gives the defenders a tougher challenge because they are facing confident, creative attackers.
So to compliment the last training session on turning, this week I want to focus on preventing turning.

Here’s a link to the Episode 2 with the training sessions to teach turning. 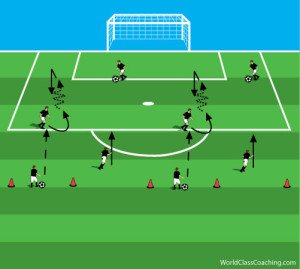 Warm-Up
A player with a ball on one end and their partner checks toward the ball. The ball is passed to them as they reach the top of the box. The receive uses a turn from our previous session and then dribbles back to where they started to perform a change of direction move which is linked to the turn they used. If they use an inside of the foot turn then they use a chop to change direction. If they use an outside of the foot turn they use a hook with the outside of their foot to change direction. They then pass to their partner who has timed their run to the top of the box so that they arrive as the ball is ready to be passed. This pattern continues for a set period of time. 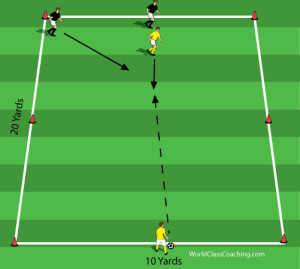 1 v 1 Turning to Target
This exercise is from a session that Keith Boanas contributed to the WORLD CLASS COACHING magazine that is part of the Member Drills Database. It was featured in the February 2015 edition of the magazine.

The half line indicated by cones or a line like the top of the box or half line. There is a target / server on each end. One of them has a ball.

An attacking and defending player start on the opposite side from the ball. The defender stands in one corner. The attacker can move anywhere along the endline.

If the attacker turns they pass to the target and the pattern continues. If the defender wins the ball they can pass it to either target to restart the exercise except the players now switch roles.

The target / servers switch with the inside players after a set period of time.

Progression
Allow the server to join in and create a 2 v 1. 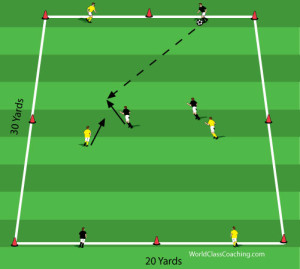 It’s 2 v 2 on the field. The targets / servers for each team are diagonal from each other. The defenders are required to start behind the attackers.

Pattern
The server passes to one of the attackers on their team in the middle. The defenders try to stop the attackers from turning and passing to their target in the far corner. If the defenders win the ball they pass to one of their target /servers in either corner. The server / targets are limited to two touches. This keeps the game moving and requires the players to transition quickly. 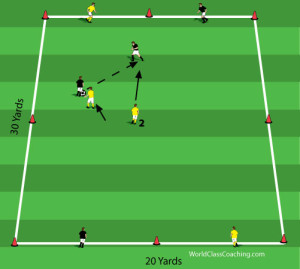 What to Look For

Variation
Allow one server / target from each team to join in creating a 3 v 3. 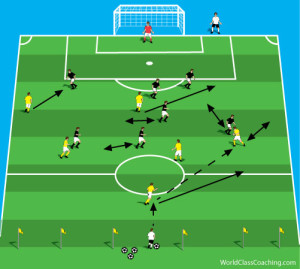 Set-Up
Goalkeeper, Back Four and Midfield Three play against six attackers. Three flag gates at the far edge of the middle third.

Trigger
Start with an unopposed pass into striker’s feet. The defenders job is to be touch tight, deny the turn and force the attacker to play back or sideways.

The other attacking players make supporting runs and then defenders adjust accordingly.

If the defending team wins the ball they attempt to dribble or pass through one of the three gates.

Progression to 9 v 8
Begin with diagonal ball into strikers feet. 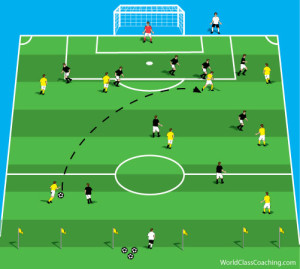 The methods and objectives are the same but it is more challenging because of the increased number of players.

Finish with 9 v 9 or 11 v 11 if possible to see how well the players can accomplish the goals of the session – deny the attacker’s ability to turn and face the goal.

There’s a lot that you can coach in this progression of phase of play exercises. What areas you choose to focus on will depend on the experience level of your team. You’re not going to go as deep with a U12 team as you would a college team but this is an effective teaching environment for all ages and experience levels.

For even younger players you may go from the 2 v 2 exercise to a 4 v 4 game where the play always starts with a ball from the goalkeeper to a forward and then play continues from there. Each time the ball goes out of play it’s restarted this way so that there are a lot of opportunities to prevent the attackers from turning.

As always, I like to finish with an unrestricted small-sided game to see how much the players have understood what you’ve worked on.

Try this method of working on an attacking topic in one session and then the counter to that topic in your next session and see how it works for you.

We talk to Stevie Grieve about how tactics at the highest level are impacting grassroots development. It’s a very interesting discussion and Stevie gives some great advice.