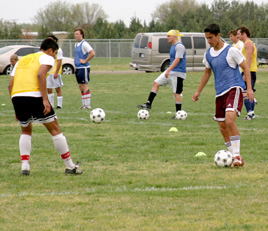 Each June we hold tryouts for our soccer club. Players can be moved up or down and new players join to replace those that choose to leave. It can be a disorganized nightmare or it can be a well orchestrated process where players are assigned to teams that will be the best place for their further development.

I was going to discuss more about tactical analysis this week but last weekend we had tryouts for our soccer club. This is a process that no one really looks forward to but it’s vital to the continued development of our players.

Having players train and play with teammates that are at the same level creates the best environment that is more fun and best for their long term learning.

I don’t know how this process works around the world but in the US tryouts occur each year. The time of year varies depending on the region.

Some clubs have a tiered system. While others have coaches within the same age group that run teams that are basically independent but they play under the same club and where the same uniform.

I feel that a tiered system is the best for player development. It’s also the best coaching environment because coaches are working together to develop the players in the club rather than competing with one another for the best players.

No tryout system is perfect but we’ve developed a very efficient process over the years that has worked well for us. I thought I would share how we have set up our tryout so that you might take some of these ideas and implement them with your our club.

The current players are evaluated during the 10 months of the previous year. Written evaluations are also given to the families twice a year: once at the end of the fall season and again at the end of the spring.

We use ZoomReports.com to organize and track our player evauations. The evaluations template can be as simple as providing comments on the four key areas: Technical, Tactical, Physical and Psychological. Or you can drill down and evaluate each individual skill and tactical component. After trying different templates we’ve settled on limiting the form to the four key areas. This focuses the evaluation and makes it simple for the player and parent to understand

Each coach ranks their players top to bottom. Top players are considered to move up to the team above them while the b0ttom players can be moved down if the coaches agree that it is in their best interest in the long term.

We use these rankings to create new rosters assuming that no one new will attend the tryouts. This gives us a starting point that is vital to making the tryout day run as smooth and easy as possible.

Each player has their photo taken and it is printed on a 6×4 card with their name and contact information. This is used to make it easy to follow up with player after the tryout and for photos that go on their players pass.

The fields are set up so that the 1st and 2nd team play each other on one field while the 3rd and 4th are on another and so on. These fields are located close to each other to make it easy to move players from one field to the next. All of our games for the evaluation are played full-sided. So whether the teams play 11v11, 8v8 or 6v6, the scrimmages are down with that number of players on the field.

The new players that are unknown are on the ‘Newbie’ field and scrimmage with whichever number of players will allow everyone to be involved. There are often fewer that two full teams of players on this field so we just want to get them playing.

The coaches that will be responsible for teams in the age group go first to the ‘Newbie’ field so that those players can be evaluated and moved to the field that is closest to their ability level. Extra coaches manage the existing players until the head coaches arrive with the new players.

If a player is not strong enough to compete in a team they are moved down to the next team where the process repeats.

Once the first team coach has selected their players the coach gathers those players and parents and invites them to join his or her team. In the instructions they receive before tryouts it is made clear that they need to accept or decline their position immediately. This allows us to form teams quickly and move on to the next player if they do not accept the place on the team they are offered.

It may seem pushy to require such a quick decision but we want players who want to be apart of our club. If they are unsure there are no hard feelings but we need to move on to the next player so that every player can be offered a spot a quickly as possible.

When the first team is formed that coach informs the second team coach and this continues until all of the teams in the age group are formed.

Each age group has a coordinator that is responsible for making sure each player is accounted for. They need to be marked as Placed, Declined, No Show or No Offer. There may be 2oo players who tryout in an age group and we make sure that each one is evaluated and placed if possible.

Players who are listed as Placed, or No Offer. Receive an email with team information or if they are not offered a place, they are given alternative programs that they can register for to improve their skills or play at a recreational level.

About two weeks after tryouts the teams meet with their coaches, usually at a local middle school. This allows for a large number of meetings to take place at the same time utilizing the classrooms in the school.

All of the details that go into running a team are covered. The Coaches layout their proposed schedule for the year including training times, league and tournament schedule. All of the paperwork that is necessary, and there’s a lot, is collected by the team managers. Finally, players are fitted for uniforms. New uniforms are purchased by the whole club every two years. During the in between years, only new players need to be fitted for uniforms.

This is not a perfect system but we’ve found over the years that this is the best way to form a large number of teams quickly.

The advantage in this system goes to the players that have been with the club because those players are evaluated for 10 months instead of just two hours. We tell new families not to worry too much about which team they are placed on at first, especially at the youngest ages. Over time the best players are moved up through the different levels if they continue to develop. Our top teams at U16 and 17 are full of players that were on lower level teams when they were younger. 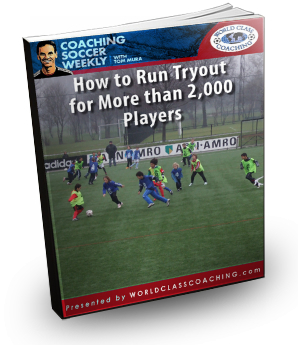 Next week I want to talk more about some of the ideas from the previous episode with John Pascarella. In the last few weeks I’ve had a couple of experiences that I’d like to share because I think they might help you when it comes time to make adjustments to your team during games.