#021 Getting a Jump Start to the Season 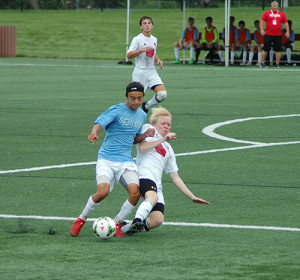 I continue to receive a lot of great feedback on the podcast as well as ratings and reviews on iTunes. I really appreciate everyone that has taken the time to send an email or write a review. I’ll do my best to bring you information on the topics and ideas you’ve requested.

This week we went past 100,000 downloads of our episodes! I’m glad that so many coaches are finding the podcast useful and spreading the word about the training sessions and information that is available here.

This week is the last week of our clubs summer break so this week I want to share what we offer our players and teams in the club to help them prepare for to return to training.

Each year our club offers a preseason camp available to anyone in the club. I like to use this as a Training Camp for my teams if there are enough players available to make it worthwhile. The camp can also be good for individuals who haven’t had their foot on the ball since the end of the spring.

I’ve found that it can be a great way to get to know a new team in a short period of time so I try to get everyone on board if possible.

This year I have a U16 girls team that I’ll be working with for the first time. We’ll have 10 or 11 girls which is enough to get some technical work done and start to build the team. But it’s not enough to allow me to spend much time on team concepts. We could do it but then we’d just have to do it again when we get everyone to training in early August.

The camp runs for an hour and a half for four days. I decided that I wanted to start with a fun activity, then cover a technical skill, add some finishing and end with a small-sided game each day.

I’ll go through each session briefly here but I’ll also put the complete training session in the printable show notes below. 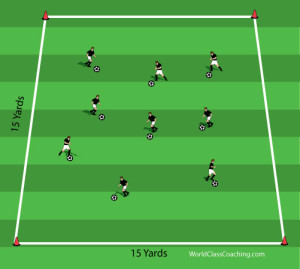 One player is ‘IT’ and doesn’t have a ball. Everyone else is dribbling inside the area. If the ‘IT’ player touch a players soccer ball they keep the ball and the other player is now ‘IT’.

Play one round with no rules. Then review the Chop and teach the players the Hook change of direction move. Allow the players to practice the movement until they understand it. Play the game again but now the players can’t be stuck if they perform a Chop or Hook. 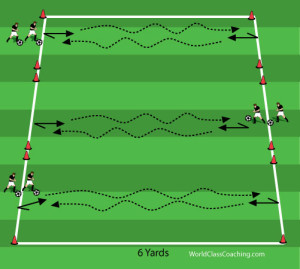 The players are in groups of three or four. The first player goes out and performs a BOB, comes back and uses a Chop, dribbles back out and does a Hook and then dribbles back to do a Cruyff before dribbling to the far side. Each alleyway is six yards long.

The other players in line perform fast footwork until it is their turn. 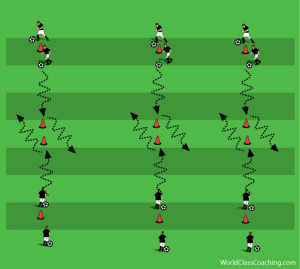 Players dribble up to the player across from them and perform one of the fakes before they reach the cone on their side.

Coaching Points
Players must time their move so they do not collide with the cone in front of them. Perform the moves and explode with get away touches under control. 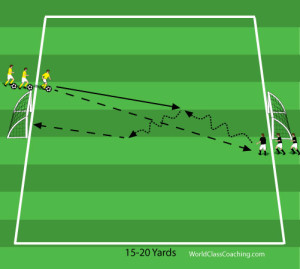 The player passes and pressures. The receiving player uses fakes and moves to beat the defender or create enough space for a shot. 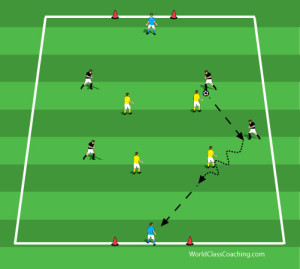 Teams defend one goal & attack one goal. Each goal has a goalkeeper.

Coaching Points
Encourage players to use their 1 v 1 moves and change of direction moves to take opponents on and score goals.

They are not allowed to pass the ball forward only sideways or backward.

Allow the players to beat defenders with give-and-goes to move forward.

The players dribble from one cone to another in a pattern of their choice. For example: Orange, Yellow, Blue or Yellow, Orange, Blue, etc.

I then give them an action for the Yellow cone; a fake like a scissors for example. Now they perform a change of direction move at Orange and a scissors at the Yellow.

Finally, I tell them to pull the ball back at the Blue cone, shield it and then turn around the cone. 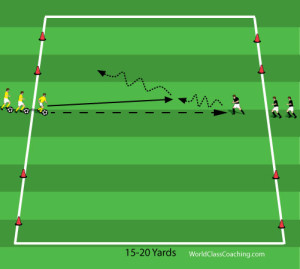 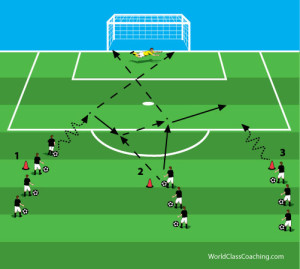 The players are matched up with one opponent. If their player scores they have to leave the field and run around it completely before rejoining the game. 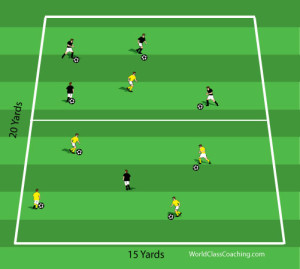 The area is divided in half with teams of five or six in each half. One member of each team serves as a defender. The defenders go into the other team’s half at the same time. They try and knock as many player’s soccer balls out as quickly as they can. The dribbler is out of the game when their soccer ball leave the area. The last team with a dribbler in their area wins the round. Pick a new defender and begin again.

Play one round and then review the Chop, Hook and teach the BOB. Encourage the players to use these moves to go away from pressure and into open space. 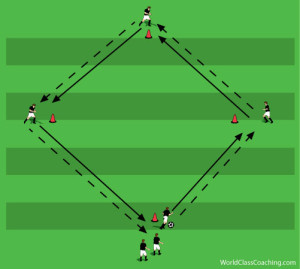 Progress to Give & Go if the players are passing well with both feet. 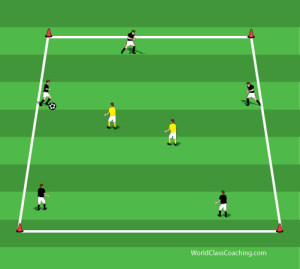 This is a simple game of keepaway to put their passing technique and decision making under some limited pressure.

If an outside player losses the ball they switch places with the inside player that has been there the longest.

Focus on the quality of the passes, open body shape and having a plan before the ball arrives. 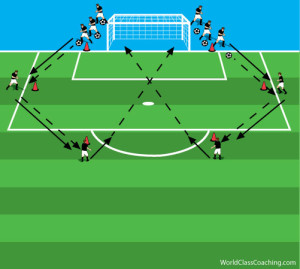 The players pass and move from one cone to the next. At the top of the box the first touch should be diagonal toward the penalty spot before shooting. The touch should be firm enough to get it out of your feet and allow for a powerful shot.

Be sure that the players are leaning forward and landing on their shooting foot.

One side begins and the other side waits until the second pass is made before they begin. This will but a space between each shot. 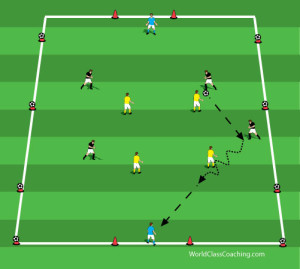 If a ball goes out of play the player who last touched it must retrieve the ball. The team who has possession can take a ball from any cone and continue to play.

When the player returns with the ball they put it on the empty cone before rejoining the game. 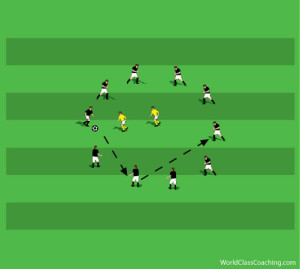 The players on the outside play one touch keep away from the players in the middle. If a defender touch the ball the last player to touch it trades places with the defender.

The ball is ball is passed to the receiver in, ‘The Cage’. They take one touch to control and one to leave the cage out to one side or the other.

The coach can dictate which touches are used and which way the players exit the cage or it can be left up to the players.

Two teams of players are divided into one half of the field each. The coach passes the ball into one half of the field and two defenders move from the other half to try to win the ball. The team in possession receives one point for every five consecutive passes. The defending team is allowed to send an extra defender to pressure the ball each time the team in possession completes five passes.

If the defenders win the ball they pass it to their teammates on the other half and start to connect passes. Only passes made in their attacking half of the field count. The attacking team should work to keep the ball in their half if a defender gets a touch or wins the ball. 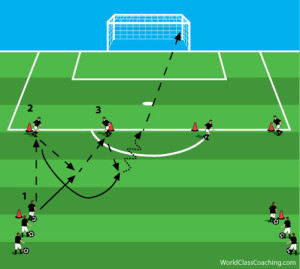 Each player moves forward one station. Player 2 returns after shooting. Player 3 collects a ball and goes to the opposite side of the field. 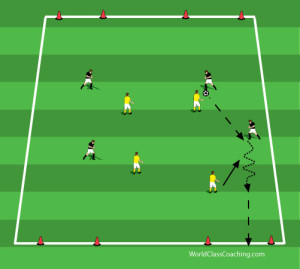 Each team attacks two goals and defends the other two.

Encourage the players to switch fields when one goal is defended to attack the open goal.

There’s nothing special about these sessions.

My goals for the week are:

I would suggest trying to set up a Training Camp if you haven’t done one in the past. If you have done one, I’d love to hear how you approached it and what worked well (or didn’t) for you. 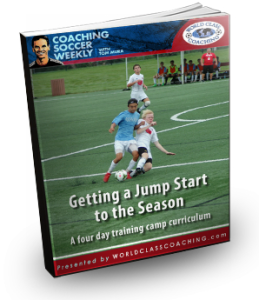 I think that at times we’re so focused on training the technical and tactical components of the game that we neglect to train our players how to be more aware of the space, pressure and opportunities around them. On next week’s podcast I’ll share some great exercises and games to help your players learn to play the game with greater vision and awareness.