#086 Arrival Activities for All Age Group 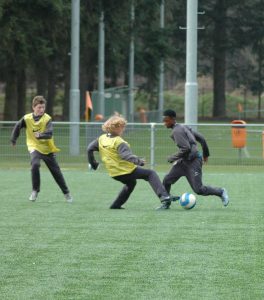 It’s great to be back in the swing of things again after the holiday break. Watching the games last weekend it was great to see the players really understanding what it was that we were trying to do when attacking and defending. That doesn’t mean that the players always executed perfectly but the intent was there.

In addition to continuing to work on ball skills and possession play we also added a couple of set pieces to our arsenal. Nothing too complicated, just one corner kick and one free kick play.

These set plays give the players a number of options from one setup so that they can read the situation and take what the defense is giving us. I also feel that organizing a few set plays inspires the players and gets them thinking creatively about these types of situations.

You might think that this time would be better spent on technical development but inspiring players to think creatively and find solutions can happen in many different ways. I think we need to expose our players to many different creative environments.

Last week I mentioned that this week I’d talk about scaling your session to fit the number of players that you have at a particular training session. Unfortunately I forgot that I already talked about that in episode 83.

So instead, I’ll answer a question from Matt about playing out of the back at the younger ages.

“I’m writing because lately there has been some debate among parents on one of my son’s teams (U9) regarding the importance of trying to build out of the back when the goalie gains possession.

In your opinion, is it better to have the goalie play to the defenders every chance they get so that everyone becomes used to playing under pressure (as eventually opposing teams adjust by pushing up and pressing more), or is it better to teach kids to make judgement calls based on the positioning of the opposing team – play short when they can, but occasionally play long when the other team starts crowding your players on every goal kick?

It seems to me you would want to teach decision making first rather than having the defenders constantly play under pressure from goal kicks (“play smarter, not harder”), but I was curious what you thought was better for long term development? Obviously this can get the full/centerbacks involved more, but does having them play under constant pressure at the younger ages teach them something that they won’t pick up in their teen years, as I’ve read some people suggest?”

I give my detailed answer in this episode and in the show notes available below.

This week I describe six different types of activities that I use to get my training sessions started while still waiting for everyone to arrive.

In my preseason meeting each summer I talk about the importance of having the players at practice on time. But that’s just not always possible. I have some sessions that start at 4:30pm. The kids get out of school around 3pm, so they don’t get home until 3:30pm and then they have to leave for practice by 4pm.

I don’t want to start my session at 4:30pm because I’ll have to explain what we’re doing to each player as they arrive and change the organization to accommodate the extra players.

So when I arrive at the field the first thing I do is to setup an activity that the players can start doing as soon as they arrive.

I’ve found that my players look forward to getting to practice because they know something fun is waiting for them right at the start of the session.

This works with players of every age group and ability level. You just have to pick an activity that’s appropriate for them. 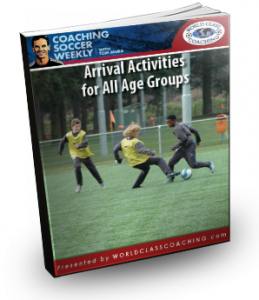 I’ll look at the characteristics of the world’s best coaches. This is a great time of year to really look at what we do and why we do it so that we can have an even better plan going into the spring season.