I really enjoyed the conversation with George about the coach / player relationships last week. It made me much more aware of all the interactions I have with my players. I’m paying more attention to what I say and how I say it.

For example, after one of my teams gave up a goal last weekend I decided not to focus on the mistake but instead I told the player who made the mistake not to worry about it and move on to the next thing.

There are times when we need to correct our players so that they know what they did to cause the problem but there are other times when focusing on the negative is not constructive and will not help the player or team in that moment.

It’s a balancing act. We won’t always get it right but being aware gives us a much better chance of doing what’s best for our players.

“This Fall we trained twice per week with both teams together. We never divided the squads into their respective teams at training. Although the coaches and I thought it was effective, other coaches in the club have questioned whether this is benefitting either squad. Most teams in the same age group are flighted Red and White but run independently. Next year at U13 we will need to expand the rosters as we begin to play 11v11. At what point should I look at separating the squads or should I keep them together as long as I can? Have you had any experience in this type of training style?”

Thanks for the question Marty!

I have trained younger teams (U12 and below) together in the past and found that it’s a great way to develop players and challenge the 2nd team players to raise their level of play. It also motivated the 1st team kids to keep improving because they could see that there were a few players in that 2nd group that could take their spot if they let down a little.

I haven’t tried to train two 11v11 teams together for more than the occasional session. If I did that I would want to divide the players up in different ways each session and have one or two other coaches that I trusted to run a planned session with the other group(s).

Training 32 to 36 players together on a consistent basis wouldn’t allow me to cover the tactical topics that are necessary to train them to play the 11v11 game. If you could work with the back six (holding mid, back four and goalkeeper) while another coach worked with the attacking five (two attacking mids and three forwards) for most of the session and then come back together to play some attack v defense games then I can see where training two teams together would have it’s benefits.

Something I used to do every week was to send out a reminder of the practice and game schedule. Families have hectic schedules and most of them appreciate a quick reminder of upcoming team events. I don’t have to do this anymore because TeamSnap takes care of it.

I can turn on notifications and the whole team gets an email when we have a game or practice coming up that week. I can also set a notification from TeamSnap to send me an email with a list of the available players before each game or training session.

Whether you coach or manage a single team or organize a whole club, league TeamSnap makes organizing every aspect of active sports life easier.

You can start your free 21-Day Trial today without entering any credit card information by going to teamsnap.com/csw

I’ve been working on a couple of different topics for the show but hadn’t finished any of them. Then I had something come up that I think is a common issue for many teams at the end of the season so I thought that other coaches might be going through something similar.

There’s a tendency for high school age players to start to ‘check out’ at the end of the club season. Either they’re just less interested in training or they stop showing up all together.

This week I talk about what I do when the numbers at a training session are small, very small. 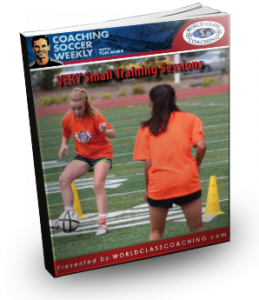