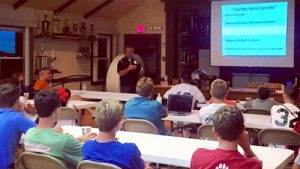 With tryouts behind me I’ve had a nice break from coaching. It’s given me more time to attend and watch some professional games. Unfortunately, the international leagues have finished but the Confederations Cup has had some good games.

I was watching the Mexico v New Zealand game when an incident happened in the box that made me ask the question, “Who’s responsibility is it to stop the game?” This follows up on my thoughts on dubious penalty kicks and how we should react to them.

In this episode I share my opinion but I’d love to hear yours. You can listen to my take on the show and then leave your comments below.

This week’s question is from Dennis

“You’ve mentioned a bit about Cogi Training. I’ve looked it up on-line, like the concept and have incorporated as much as possible into my sessions. Could you guide your listeners to the entire system on-line?”

Thanks for the question Dennis.

There isn’t one book, video or web site that will show you everything there is behind the Cogi Training system. I asked Michel Bruyninckx, the originator of Cogi Training, about this last summer when we attended his coaching clinic. He said he wasn’t able to distill the training method down to fit in a book or video.

Hopefully he’ll try in the future but for now you can visit www.cogitraining.com for the latest information on Cogi Training.

I’ve been preparing for my preseason team meetings that are coming up this weekend. We do these each year and I think they are a very important part of the process of running a team. I thought I’d share how I structure mine and why I think they’re so important

This week I share how I structure my preseason team meetings and why I think they’re so important.

I haven’t settled on a topic for next week. I have a few ideas in the works so check back next Friday to see what I decided.