In this episode I share a session on turning. This is obviously an important skill for players at every position. Turning away from pressure and into space is one of the foundational skills required to possess the ball. Turning the ball with control also works on the first touch since you have to have a plan for where the ball will go and how you will get it there. It’s very important that the players know where the pressure is so awareness is a key element of turning successfully. Since you have to have good service to practice turning, passing technique is central to the success of the practice.

This is a progressive session so it gradually adds pressure and complexity and ends by applying the skills in game situations. This progression helps to create a transfer of training from the basic practice to a game.

I think you’ll find this session useful for teams of any age or experience level.

Two lines of players. There’s a cone gate in between them. One player starts with a ball. The player across from him shows into the gate. Timing their run to go through the gate as the ball arrives. The passer needs to be sure to let the receiver get through the gate before they have to take their first touch.

The receiver then turns around the outside or through the middle depending on the type of turn they are using. After turning the ball is passed to the first player in the line they came from. With younger players you might have each player have their own ball so that the exercise moves more quickly.

Inside of the Foot

Outside of the Foot 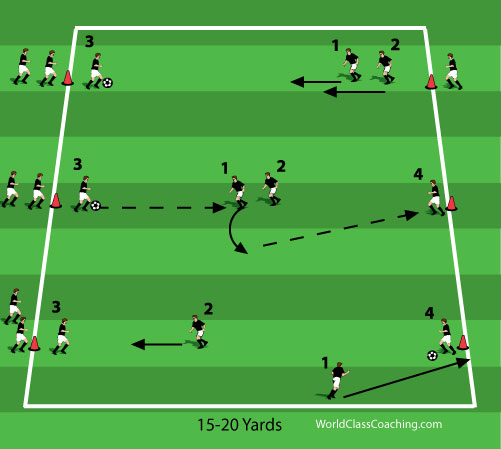 This begins as a pattern exercise to focus on the technique of turning and we gradually add pressure.

I like to incorporate shooting into training sessions whenever possible

Now we’re moving toward applying these skills to game situations

This allows you to see if what you’ve taught has been understood and can be applied without artificial rules.

I talk about my favorite format for training creative goalscorers. Technical shooting work is necessary but it’s exercises like this that help you transfer that skill training to the game.

In an upcoming episode we talk to Wayne Harrison about training soccer awareness. Wayne has coached at every level of the game and I know you’ll enjoy his insights.