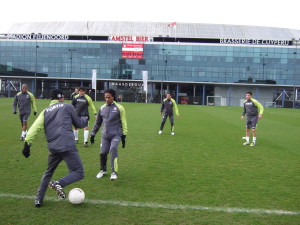 We’ve continued to get some great feedback on the podcast. Thousands of coaches are listening every week and it’s great to hear that they’re enjoying the show.

Some have been sharing the episodes with their friends and followers on Facebook and Twitter. Thanks to @precisionfutbol for helping to spread the word on Twitter.

We’ve also continued to receive some great ‘5 Star’ reviews and comments on iTunes: Adam McCracken (great username) said ‘If you are in your first year of coaching or a veteran coach, coaching high school and college, Tom has something for everyone. Great in depth look at a different topic each week that will make each coach and team better. Even as a college soccer player myself I found different things I would have never thought of.’ – thanks Adam

AElliott2 said ‘This has great information. I’m not a soccer coach by nature but I’m doing the best I can for my young kids. Thanks for helping me “fake it ’till I make it!”’

Jakbb88 said ‘Great information for all ages and skill levels!’

Thanks to everyone who took the time to give us a review and a ranking in iTunes.

Here’s a question I received by email:

I have enjoyed the podcast recently but had a question. I will be coaching u4 soccer this season and am looking for some drills and/or games to teach the basics to the players. I am trying to focus this season on not using hands, basic rules, and dribbling basics. Any advice, books or games would be greatly appreciated.

I’m glad you are finding the podcast valuable.

I’ve spent a lot of time working with 3,4 and 5 year olds in the past so I have a bunch of games that I use with those age groups.

‘Stuck in the Mud’ is a great one for this.

All of the players are dribbling. You are the, ‘Mud Monster’. If they keep their ball close to their feet you can’t touch it. If it comes away from their feet you can touch it and they are, ‘Stuck in the Mud’. They hold the ball in their hands above their head with their feet spread wide. The only way they can get unstuck is to have another player pass a ball through their legs.

You can progress this by teaching them to use the farthest foot from the ‘Mud Monster’ to protect it. If they use the closest foot you can touch it.

You can also work on a change of direction move like an chop (inside of the foot turn) or a hook (outside of the foot turn) and tell them you can’t touch the ball if they do one of these moves.
The great thing about you being ‘It’ is that you control the amount of pressure each player receives. You can challenge the ones that get it right away and take it easy on the ones that need more time. Don’t let the kids be the ‘Mud Monster’ until they have developed enough control to deal with the greater pressure that another player is going to put on them.

Email me your questions to tommura@worldclasscoaching.com and I’ll do my best to help.

The 5 v 2 possession game is probably the most popular possession game. It’s a great way to teach the basics of possession or challenge more experienced players with smaller spaces and greater restrictions. In this episode I discuss different ways to setup your 5 v 2 exercises depending on what you are trying to accomplish. 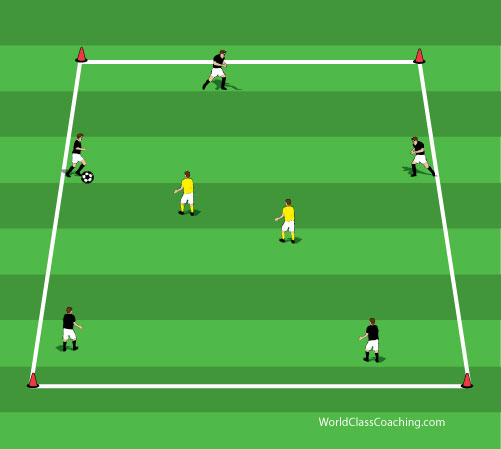 The outside players pass and move the ball around the outside. They should move with each pass to support the player on the ball. The focus is on moving the ball away from pressure.

This is not the only way to play. Maybe not the best way either. 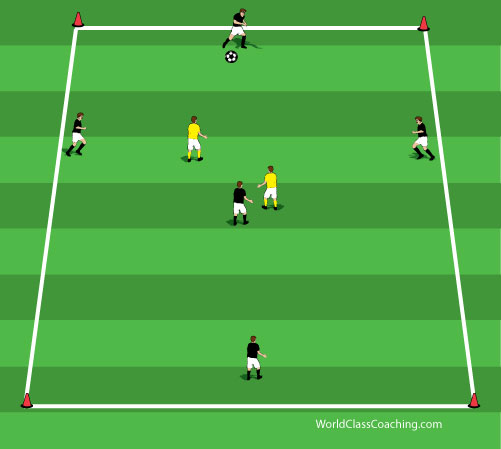 Four Outside With One Inside 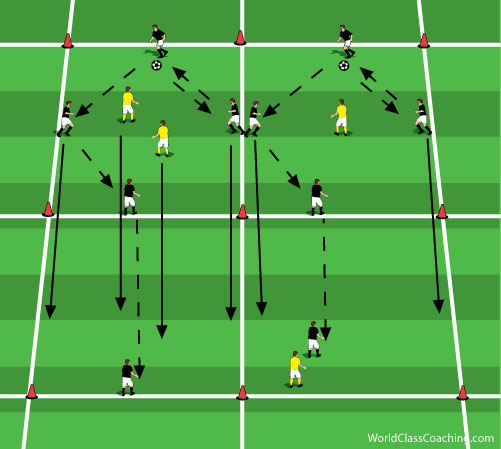 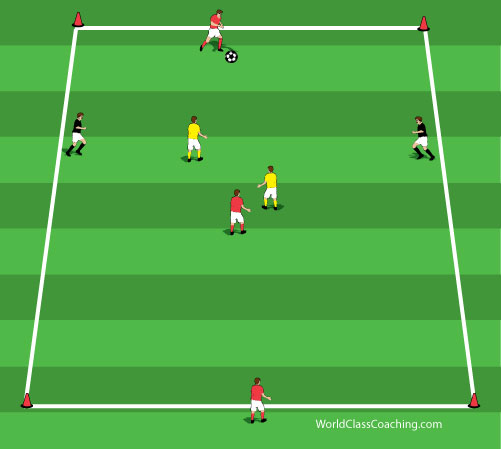 5 v 2 games are great for teaching the key concepts of possession. Once they understand angles of support, body position, the importance of the first touch and having a plan it will be much easier for them to see these moments in larger possession games and ultimately in the game.

The ability to take a good first touch and make a quality pass is just as important to success in this environment as anything else. If your players understand the tactical concepts of support but can’t make a pass that keeps possession these games will constantly breakdown.

The key for the coach is to closely watch these games and see if the breakdowns that are occurring are technical or tactical. Knowing this will allow you to focus on that area and make the coaching points necessary to help your players keep the ball more effectively.

In next week’s episode I’m going to discuss a topic that I think all coaches should be more aware of. It’s an improvement that we all want to see but I don’t think we are doing as much as we can to help make it happen.