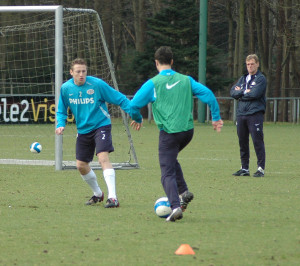 I show you six practice environments that I use for 1v1 training. They focus on each of the key 1v1 situations that players will face in the game. Each of them gives you an opportunity to train both the attacker and defenders. They all allow the players to be very creative and free to try new skills.

1v1 situations are such an important part of the game that coaches at every level should be spending at least some of their valuable training time in these types of environments.

Broken down to its most basic elements, soccer is a series of 1v1 games all over the field. The objective of each one is different. Sometimes it’s to keep possession and find a pass. Another time it may be to win a loose ball. In the attacking third the objective may be to create enough space for a cross. In front of goal the 1v1 is a battle between a player trying score and one trying to stop him.

When we’re designing our training environments we need to keep in mind that all of these situations are important and be sure that each one is addressed with a different exercise or game. If we plan well, we can even train more than one of these aspects of 1v1 at the same time. 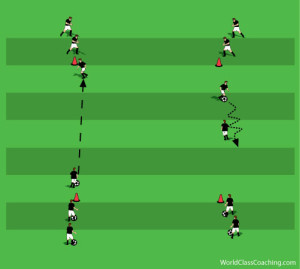 Before I do 1 v 1 training with my players I like to teach them a few moves to give them ideas about how they can break down defenders.

An easy way to work on these moves is to create two lines facing each other. At first both players can have a ball and they dribble toward each other and perform the same move (with the same foot) and then dribble past each other.

You can then progress to having one player pass to the other and then pressure him. First passively, only jogging toward the attacker. Then you can make the defender more active to challenge the defender.

This is also an opportunity to teach defensive positioning and tactics.

These are my six favorite training environments to work on 1 v 1 situations. 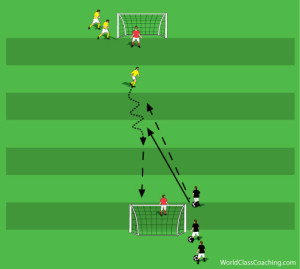 Two Line – One Next to Each Goal

Defender passes to the attacker and pressures. The attacker attempts to beat the defender and score.

If the defender wins the ball they can attack the other goal. 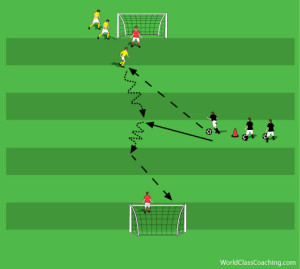 Two Lines – Defenders to One Side

As before but now the defenders are running to the get in front of the attackers. The attackers can take advantage of this by tricking the defender into over-committing or by driving inside and then taking the ball outside. 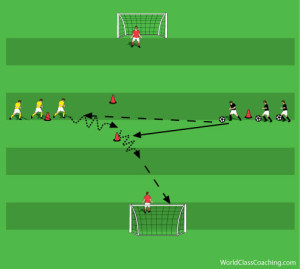 Two Lines – One on Each Side of the Field

The defenders are now forced to move across more quickly which creates an even greater likelihood that the defender will over-commit. 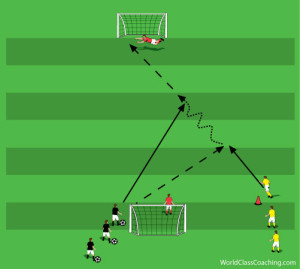 Now the defender passes in front of the attacker who takes his first touch toward goal. The defender attempts to recover to a goalside position. 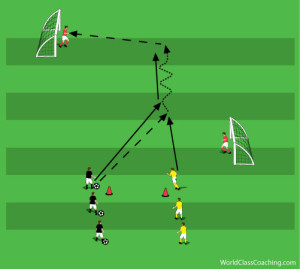 Two Lines – Down the Line

The defender plays the ball in front of the attacker who tries to beat the defender and create a chance to shoot.

If the defender wins the ball he can move to attack the other goal.

Move the lines to the other side of the field to work on shooting with the other foot. 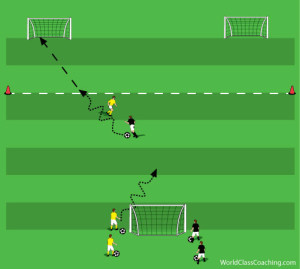 The attacker must get the ball into the ‘scoring zone’ before they can shoot. As soon as they shoot an attacker from the other team comes on to the field and tries to score in the goal diagonally across from them. Each time an attacker shoots they immediately become a defender. 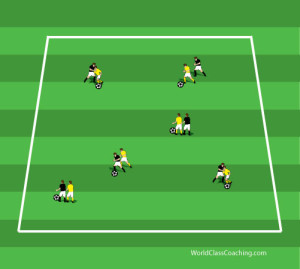 Players are matched up and compete to keep the ball. At irregular intervals the coach stops the game and counts the number of soccer balls each team possesses. The team with the most wins a point for that round. You can play for a set period of time or until one team reaches 10 points. 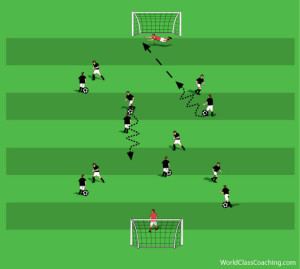 The ideas and methodology behind this competition are described in ‘Training Soccer Legends’ by Andy Barney.

Each player in the session plays every other player in game that lasts from two to three minutes, depending on the number of players in the session. If the attacker scores they keep the ball and attack in the other direction. This ‘make-it-take-it’ format encourages the players to work hard defensively or they will not get a chance to attack.

You can download a PDF of the 1 v 1 Round Robin Matrix and Score Sheet by clicking the link.

The same format is used but it is NOT ‘make-it-take-it’ and each game is played until one player scores three goals. At the end of each game the players in come to the side and wait for another game to end. The winners of each game play next as do the players who lost each match-up.

The first player to win three match-ups wins the competition.

These are the six different environments I use to train 1v1 situations. Over the years I’ve found that they effectively teach players how to deal with each of the situations they face in the game.

No matter what age group or ability level you’re working with, 1v1 games should be an important part of your training plan.

In next week’s episode I will share a complete training session to help your players learn to combine in order to get behind the defense and create goal scoring chances.