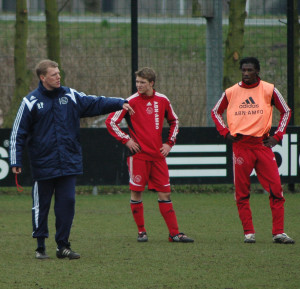 Thanks for joining me for episode 10 of the podcast. Last week I asked for feedback and suggestions. I received a number of good responses.

One of them is focused on how to use ‘Free Play’

Tim asks, “How do you set up free play?  Whenever you allow your players free play, how involved are you? I image you handle substitutions and try to ensure equal playing time, but is that where you stop? Do you do anything in regards to formations, positions, or any other technical or tactical coaching? How much free play do you allow your teams? Would you vary the amount of free time that players get in different age groups?

Thanks for the question Tim. I use the last part of the small-sided game at the end of each training session as ‘free play’. I make sure everyone is involved so that we don’t have any subs. I use a neutral player if we have an odd number. If i want to play 4v4 I’ll just create two of these games so that everyone is playing. I have the players decide what shape and positions they’ll use. Even your youngest players can do this. I try to give the players five to 10 minutes at the end for free play. This is the same for every age I work with.

In this episode I want to share a complete training session designed to teach your players different ways to get behind the defense. It starts with an arrival game to get the players engaged right away. Then we do some technical work so that the players are passing and moving well. Next, I introduce some patterns along with options that the players can choose from.

I’ll show you the progressions I use that lead to taking a shot on goal. We then get into a game related activity to allow the players to use the patterns against active pressure. The session finishes with small-sided games to test the player’s ability to use the techniques and tactics in game situations.

Today it seems that coaches are most concerned about maintaining possession. Keeping possession without creating chances to score is more of a defensive tactic than an attacking one.

If you’re going to create goal scoring chances you’re going to have to do more than possess it in front of the other team. You need to get the ball behind lines of pressure.

This training session is focused on finding combinations of movement and passing to accomplish this goal. 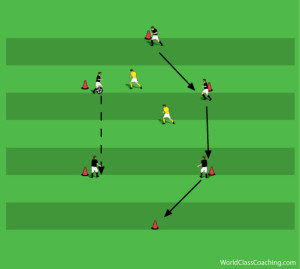 There are six Cones but only five attackers. As the ball is passed the players move to make sure that the player with the ball has support. The two defenders work to break up the possession. Change defenders after the ball is lost four times. 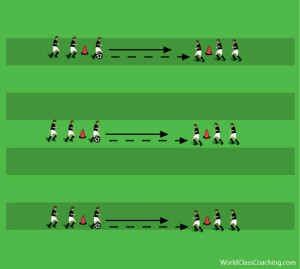 Three balls are passed back and forth. The players pass and follow to the end of the other line. This is a technical warm-up to prepare for the session. It’s important to stress the quality of first touch and the pass. 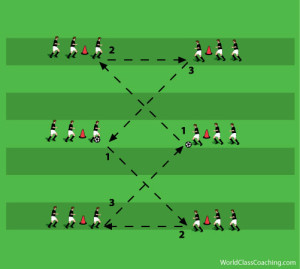 Next the same pattern is completed in the other direction. 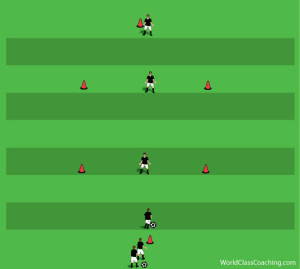 The movements are cued off of the seocnd player. He chooses right or left. The third player goes in the opposite direction.

Ball played to second player and laid off. The ball is then passed to third player who lays it off for the second player to follow and pass to the last player.

You know it’s clicking when the second player starts to fake one way and go the other. The players are asking for the ball. They are spinning out after their layoff to support the next pass. Once the players start to move quickly and play one touch they are ready for the next exercise.

Use the same patterns but the last player can turn and shoot or lay the ball off and then move for the return pass. 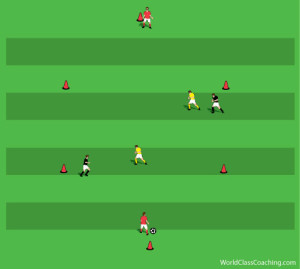 Look for similar movements and patterns: 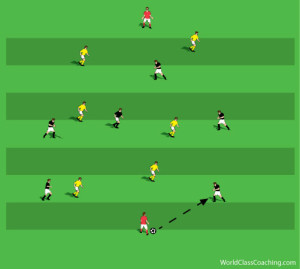 This is really just a progression from the 2 v 2 game. It’s more complex with more players to combine with.

Look for the players to create levels of support (right, left and split) as they try to move the ball from one target to the other. 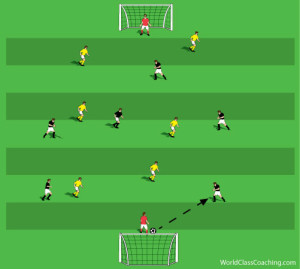 Finish with a Game

Look for the players to recognize situations from early in training. Be sure to focus your comments on the topic. Be sure that the players are getting the ball through lines of pressure. If this isn’t happening it can often be because the attacking team is not making runs behind the defenders.

Don’t stop play unless absolutely necessary. Let the player express themselves and see what they have learned from the session.

In next week’s episode I want to show you fun ways to start your training sessions that will help to motivate and engage your players so that they are ready to learn what you have to teach them.