Learning to be Creative 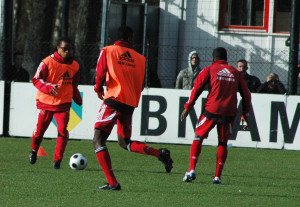 I believe that we need to teach our players a variety of individual fakes and moves in order to spark their imagination and encourage their creativity. By learning a few moves they will see what is possible and this will give them a framework for their own creativity.

The same can be done with creative combination play. If we teach the players a few basic movement patterns, and the keys to making them successful, then this will lead them to find their own patterns in the game.

That is the goal of this session. 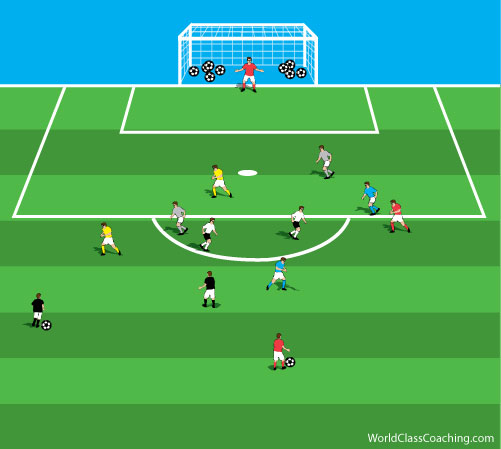 This game can be played individually or in pairs. I prefer to play it individually as an arrival game. When a player scores they become the goalkeeper. If you play in pairs you can say that the first team to score three goals wins. 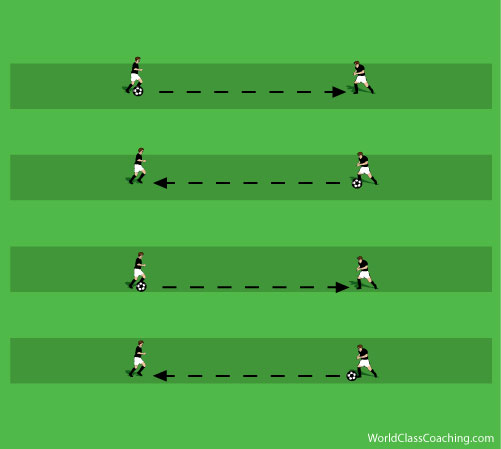 Start with two touch. Focus on good technique: ankle locked, toes up and out, bouncing the ball off of your foot. We begin by passing right to right. I use my right foot to pass to their right foot. We switch to left to left and then to receiving with one foot and passing with the other.

Only progress to all one touch passes if you think your players are ready for that. 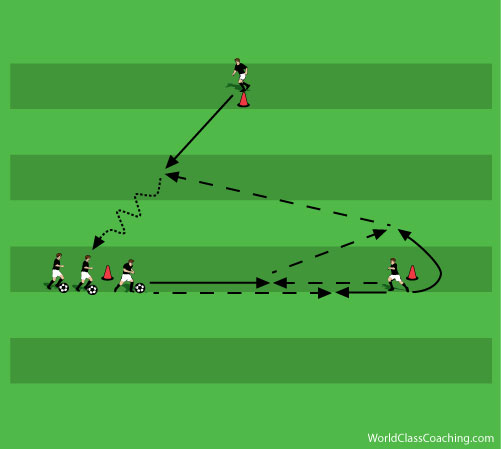 The pattern starts with a checking movement and shout by Player 2. Player 1 passes to him and follows his pass. Player 1 and 2 then complete a give-and-go around the cone before Player 2 passes diagonally to Player 3

Player 1 moves to the second cone, checks and the pattern continues. 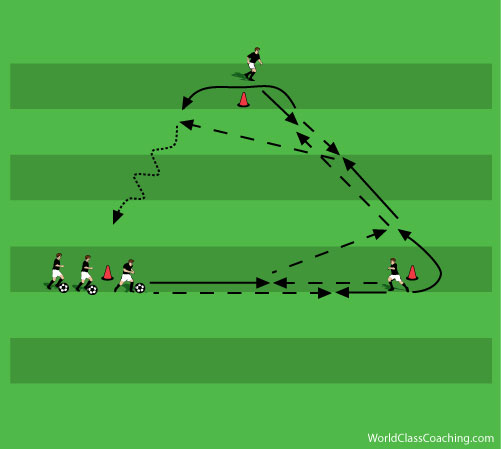 The first movement are the same but now a second give-and-go is completed around the third cone with Players 2 and 3 before Player 3 dribbles to the first cone.

The coaching points are the same as above. 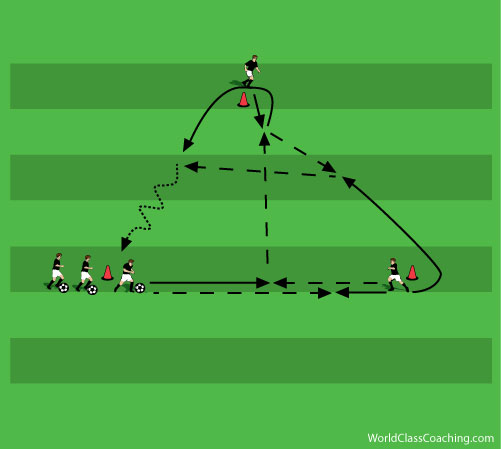 Player 1 now passes to Player 3 after receiving the layoff from Player 2. Then Player 2 runs around the second cone to support Player 3 and complete a give-and-go.

The final phase is to allow the player to choose which combination of passes and movements the will use to get the ball around the triangle. Anything the choose is fine as long as the quality of the passes are good and the timing and distance are realistic to the game. 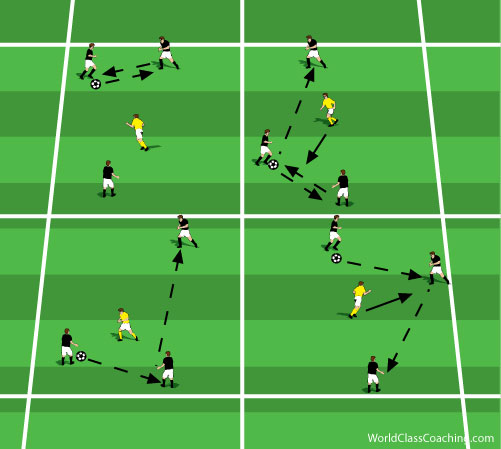 While the movements aren’t exactly the same as the pattern play, this is an opportunity to work on providing a short and long pass to the player with the ball. This will make it hard for the defender to pin the attackers down to one area.

It’s also a time to talk about dropping off to support your team mate after a pass in order to draw the defender in and open up the longer pass. 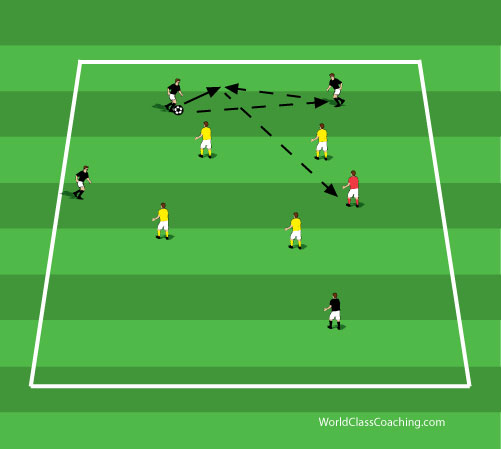 This is a nondirectional game where five passes equals one point. Encourage the players to find patterns in the game from the previous exercises. They should also look for the chance to draw a defender in and then switch the ball to the open space. 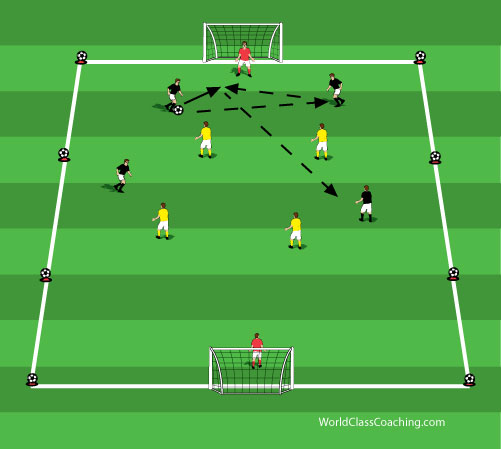 This is a multiple ball game that was on our CoachingSoccerConditioning.com blog post a couple of weeks ago. Here is a link to that post.

This is a normal 4 v 4 game except there is a ball on each of the out-of-bounds cones. When the ball goes out of play, whoever touched it last has to retrieve it while the team who gets possession takes a ball off any of the cones around the field. The player retrieving the ball must return it to the empty cone.

This creates a numbers up situation for the attacking team. This numbers-up situation is perfect for working on the combinations learned earlier in the session. It also creates a fast paced game that involves a lot of sprinting so it’s great fitness as well. 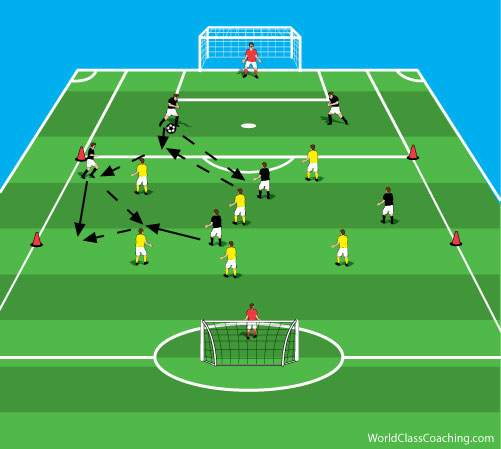 You could end the session with the 4 v 4 games but I wanted to work with larger number to finish so we played an 8 v 8 game. This let me see if the players could find the patterns within a game with larger numbers.

You can use this session to give you inspiration for creating your own combination play session. There are many other drills and exercises you could use to accomplish the same objective.

In the end it’s about giving your players ideas and then letting them apply those ideas to what they see happening in the game. 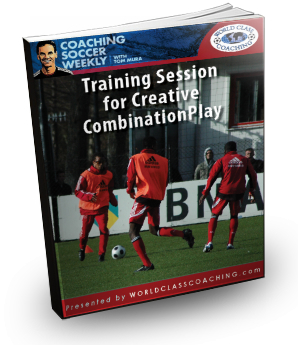 In next week’s episode I’ll share ideas for how to train your players to move more effectively without the ball.