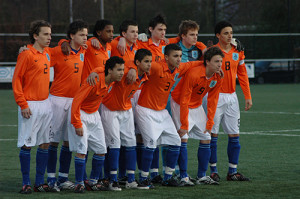 A few weeks ago I mentioned what a crazy time of year this is. The last tournaments of the year lead into State Cup and President’s Cup competitions. That’s immediately followed by tryouts. Now’s the time to look back and review.

Last week I gave you an overview of our tryout process. This week I look at how I arrived at a formation and style of play for one of my teams as well as how it evolved and changed over the course of the year as well as how it might change during a game.

This is a process that I think we all go through with our teams. I thought you might find it interesting to hear how I approached the task. I’d be interested in your perspective as well so please let me know what you think by sending me an email or posting in the comments section of CoachingSoccerWeekly.com under this episode.

I want to talk about making adjustments to your team during the game but first I think it’s important to set the stage by talking about how you arrive at a formation for your team in the first place.

I always say that at the beginning of the year it’s like you have a puzzle to put together but the problem is there is no picture on the pieces; you just have to starting trying to put them together until they fit.

Coaches all have their favorite formations. Ones that they’ve played, formations that they are comfortable teaching and have worked for them in the past. But I don’t believe that you can put any set of players into any  formation and make it work for them. The formation needs to be adjusted to fit the players not the other way around.

First I find out where the players are comfortable. This might be where they’ve played in the past or just where they are most comfortable on a soccer field.

While I have some ideas of where they can play from tryouts. I don’t pick my teams by position at the younger ages. I focus on selecting the players that are of a similar ability and then fit them together into a team. At the older ages we look more at creating a balance between defenders, midfielders and forwards within the team.

During the first couple of week I look for the tendencies of the players. Are they more attacking or defensive minded? Are they aggressive or a little soft? Who is good technically? Who can strike the ball well? No player has everything in one package. Every player has something to offer the team. Our job as coaches is to arrange these players to maximize their talents and combine them into an effective team.

I play a lot of small-sided games with the players and have them organize their own teams so I can see what positions they gravitate toward. I also have them rotate often so I can see them in different positions.

Having our teams in the same age train at the same time on adjoining fields gives us the opportunity to scrimmage for the last part of practice occasionally. This makes it easy for me to move players around and try different formations.

A preseason tournament can provide a great opportunity to evaluate your team’s abilities and potential formations. I like to find friendly events with no finals if possible. Playing three or four games over a weekend makes it easy to compare how they look playing in different shapes without being concerned about advancing.

I start with my favorite formations: 3-4-3 for girls teams and younger teams, 4-3-3 for most other teams. I like playing with three up front and with girls and younger teams you can often play with three in the back because they’re not able to switch the ball with one touch to expose the back side of our defense.

I like the 4-3-3 formation because of how flexible it is. You can move easily from there into a 4-2-3-1, 4-3-2-1 or even 4-5-1. This makes it easy for the players to see how minor adjustments to their roles and responsibilities can transform the formation.

Sometimes this is all it takes and it’s obvious how the players fit together. But this year I had a team that was difficult to organize from the beginning of the season.

I coached a U12 competitive team this year that had been very successful the previous year but had some turnover of players during tryouts. I added some very good players but we needed some work technically. That’s not unusual for players at this age but we were more talented physically than we were technically at the beginning of the year. Add to that the fact that we would be playing up in the U13 division so that we could play 11 v 11.

I’ll let you listen to the podcast to hear how we approached these challenges.

I think as coaches sometimes we want to tinker with the team too much. Once you have a formation, system and style of play that works well for your players you don’t want to change it drastically. Subtle adjustments to the player’s roles and responsibilities can completely alter the focus of the team and help them see out a game much more easily than completely changing formation. 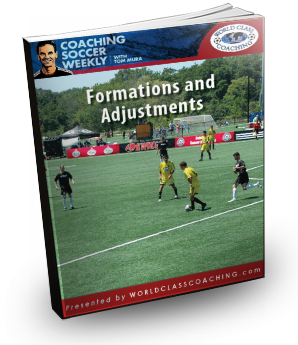 Next week I want to talk about how you can improve the technical ability of the players in your club with a systematic approach that I think you’ll find interesting.