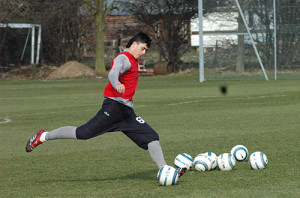 At the beginning of each season I always plan to do a shooting session in the first week. I have a shooting exercise or game in each training session but what I’m talking about here is a complete practice focused on shooting.

I set the session up as a progressive practice that begins with a focus on technique and gradually becomes more dynamic and functional. I feel that this is a session that you could do with just about any age group, especially early in the season. Players of every age and ability level can benefit from working on their shooting technique.

With older, more experienced teams, you may move through the basic technical work a bit quicker and add more complexity and pressure to the second phase of technical work. Then you could spend more time in functional situations and the small-sided game at the end.

One of the most important features of this session is that it gives me the opportunity to teach my players the vocabulary that I use so that we can have a ‘short hand’ when I’m correcting them in training or in matches. They need to know specifically what I’m looking for when I say I want them to bend their run, lock their ankle (foot like a fist), foot next to the ball, see their foot hit the ball and land on their shooting foot. This will allow them to realize what they may have done wrong and make the adjustment quickly without me having to stop and break it down for them.

Wembley
I like to start with this to get the players engaged and in a shooting mindset.

The player enjoy this so it creates great energy for the session. This game gives me time to set up the session. I can also watch the player shooting. This is especially important if I have a new team. I can see what are they doing well and what needs to be corrected.

I like to set up the field once for the whole session whenever possible. This is an easy session to do that with. You’ll need cones, flags (or mannequins) and goals. Along with at least one ball per player.

Next, I’ll have the server back up as the player volleying the ball comes forward. They need to move their feet to get ready to volley.

Then, the server moves forward as the player volleying the ball moves backward.

Finally, they volley the ball back to their partner and move to the right. When they get to the end the run around to the start and keep going until they return to where they started. Then volley and move to the left.

Passing on the Ground with Laces

Here I focus on bending the run, foot next to the ball, landing on the shooting foot.

The players pass the ball back and forth with their laces. Ball is still when struck. This setup allows you to cover all of the technical requirements.

Push the ball forward so it is rolling before the players strike it.

Put flag in front of lines 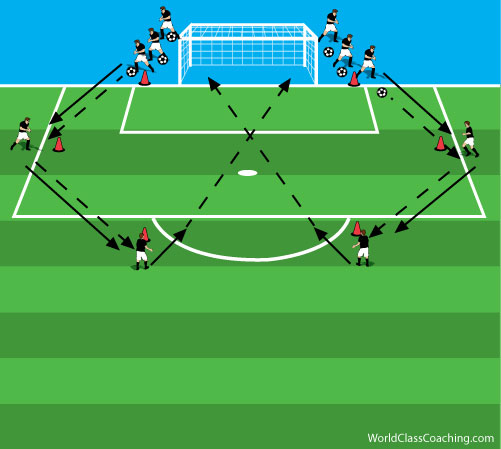 I’ve used this session with players from U8 to U18. Keep it simple with younger players and raise your expectations for the older players and this can be an effective technical training session for teams of any age. 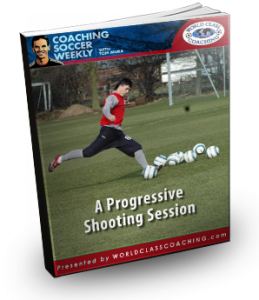 There are a great many books and videos that discuss the different formations that can be played in the full-sided, 11 v 11 game but I haven’t seen many that look at how coaches should organize their players when they are younger and playing 6 v 6, at U8, 9, 10 or 8 v 8 at U11 and U12. Next week I’ll discuss the formations that I’ve seen work well for U8, 9 and 10 players.