#029 Getting the Most Out of Uneven Match-Ups 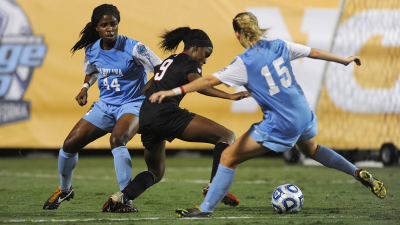 As we reach the midpoint of the fall season here in the Midwest my training sessions are becoming more focused on small-sided games. Early in the year I spend a lot of time on technical training and individual skill development. This provides a foundation of understanding for dribbling, fakes, passing, receiving and shooting. The players have heard the coaching points from me over and over so we have a kind of short-hand that makes it easy for me to help them make corrections.

With this foundation in place, the players need to repeat these skills over and over again in game situations. Small-sided games provide a fun and realist environment for this repetition. The players enjoy playing games so it’s much easier to engage them. The sessions are fast paced and fun for me too.

Next week I’ll give you some examples of adjustments that I make to small-sided games to focus on the aspects that I want to improve.

This week I want to discuss a situation that all coaches face from time to time – the lopsided matchup. These games are no fun for either team but they do present an opportunity that can make your team stronger going forward.

I’ll talk about my own experience with these types of games and how you can get the most out of them no matter which side of the result that you’re on.

The Challenge of the Mismatch

If you’ve coached for any length of time you will have been involved in a game where one teams was MUCH stronger than the other. This is not a good situation for either team; no one enjoys getting outplayed and outscored but even the team that is doing the scoring doesn’t enjoy the game because it’s not challenging for them and there’s no fun in winning a game by a wide margin against an opponent that doesn’t have the skills to compete.

This is different than winning a game by four or five goals against a team when you’re just playing really well and they can’t seem to find a way to stop you.

I’m talking about the games where the two teams don’t belong on the same field. This can happen in a tournament where the teams are incorrectly seeded or in a league game where a newly promoted teams from division three plays a team that was just moved down from division one. They are both division 2 teams but the difference in talent and ability may HUGE.

I had a recent experience with mismatched games in a tournament that I talk about in detail on the podcast. I used some of the strategies I’ll discuss to keep the score down and make it more competitive.

As with most situations we face, you can choose to be negative and resentful or you can try to get the most out of it you can.

The First Adjustment I Make

Rules for Your Players

The Problem with Altering Your Play

What to do When You’re the MUCH Weaker Team

Remember that regardless of the level we’re coaching we’re training kids to become good people not JUST good soccer players.

If you use some of these strategies when your next game gets out of hand you could be teaching your team something it would have taken much longer to do in any other way. 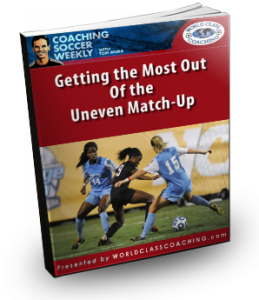 Please take a moment while you’re on iTunes and give us a ranking and a review. This will help bring our podcast to the attention of more coaches and spread the word about the ideas and training sessions that we’re sharing.

Next week I’ll share how I use rules and restrictions to focus on certain skills or tactics when my teams are playing small-sided games during training.