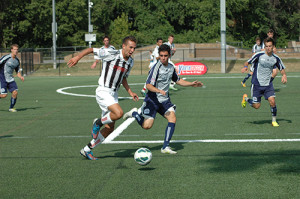 Teaching your players the key elements involved in effective combination play will give them a framework to combine with their teammates in a free flowing game environment. Today I share three progressive training sessions that I’ve used to teach my players these key elements.

These sessions represent a three-week MicroCycle that I used with a couple of my teams to teach them how to combine effectively. There are a wide variety of combination plays that can be taught but I focus on the give-and-go and the overlap. I think these are the two most common and provide most of the key elements of combination play.

The first session focuses on the give-and-go. The second one teaches overlapping and the third one gives the players the opportunity to decide when and where to use each one. 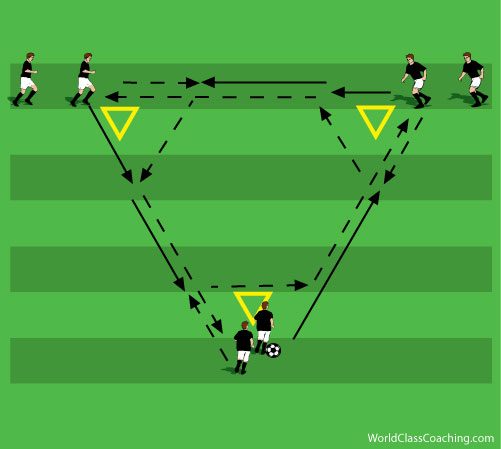 We start with passing and moving to the right and then to the left as a technical warm-up. Then the players complete a type of give-and-go around the triangles. 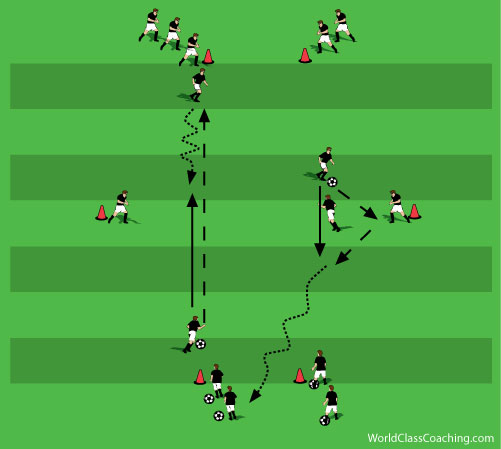 Once the players understand the pattern and key points they need to focus on the decision making aspects. The attacker needs to commit the defender before passing. The wall passer needs to recognize when NOT to make the return pass. This is when the attacker has not fully committed the defender because the ball was passed too early. This is a cue for them to keep the ball and dribble. 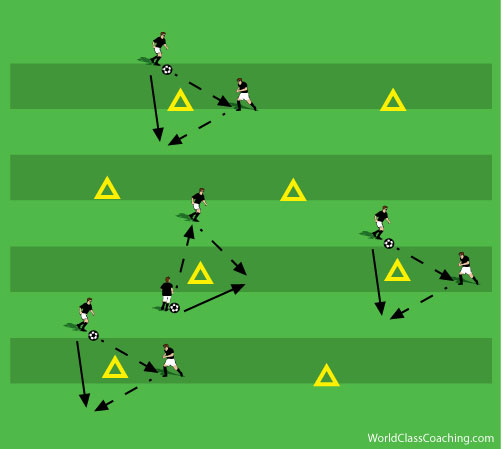 We use the triangle from the warm-up to represent defenders. 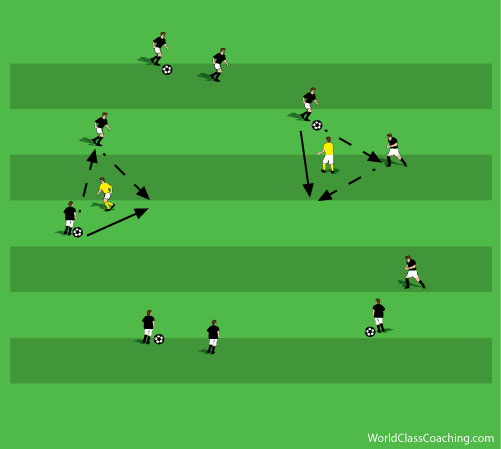 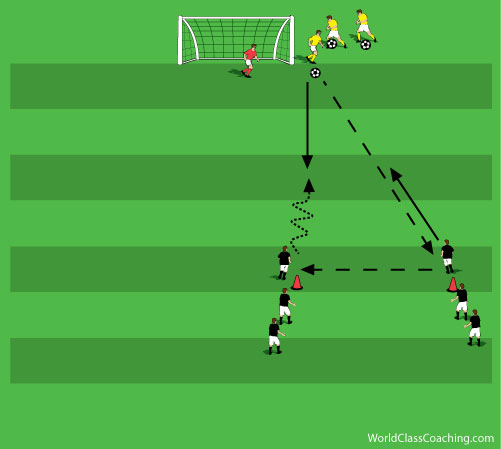 The defender passes to the outside attacker who then passes to his teammate. The attacker with the ball dribbles at the defender while the second attacker moves into position as a wall passer. The defender attempts to win the ball.

The attackers must make the correct decisions to beat the defender and finish on goal. 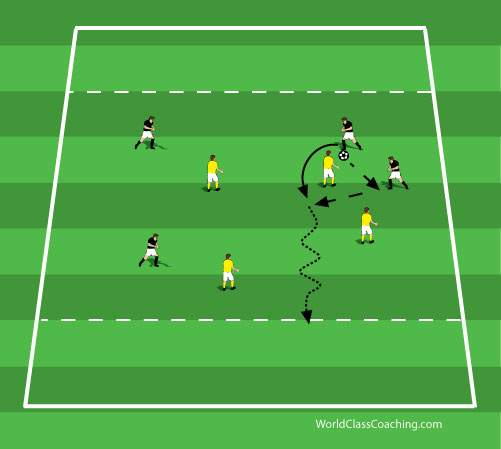 The players are required to perform a give-and-go before they can dribble into the endzone. You can remove this rule and allow for free play at the end of the session. 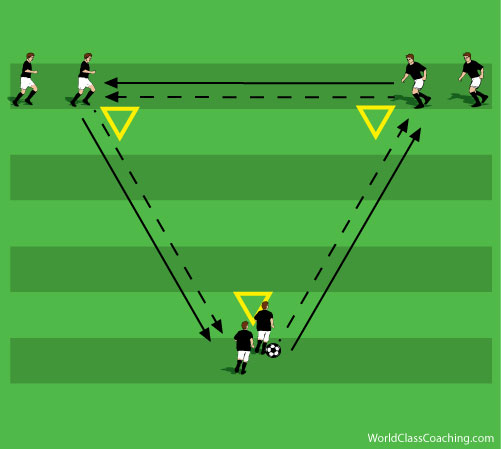 We start with passing and moving to the right and then to the left again as a technical warm-up. I also introduce the players to turning with their back to pressure around the ‘defenders’. 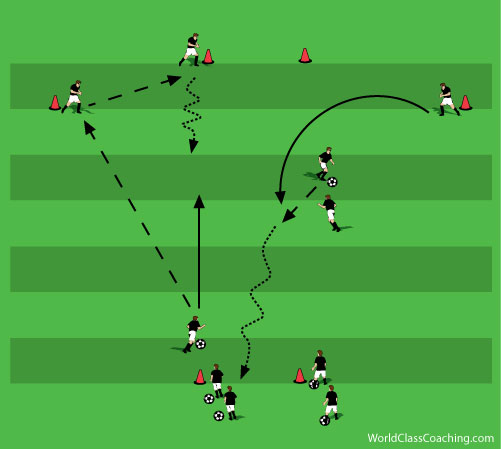 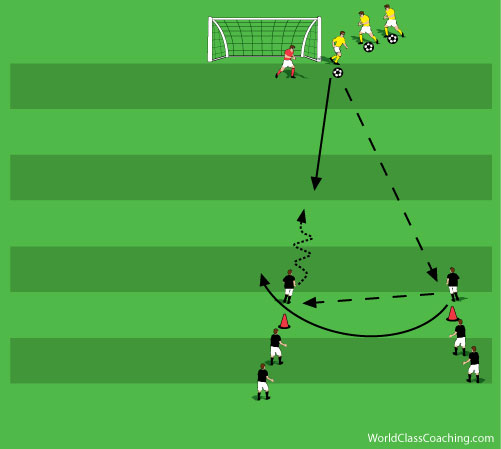 This is the same exercise we used for give-and-goes. It provides the opportunity to emphasis the key points and put the combination play under the pressure of an active defender. The players are punished for mistakes by losing the ball and rewarded for good decisions with a shot on goal. 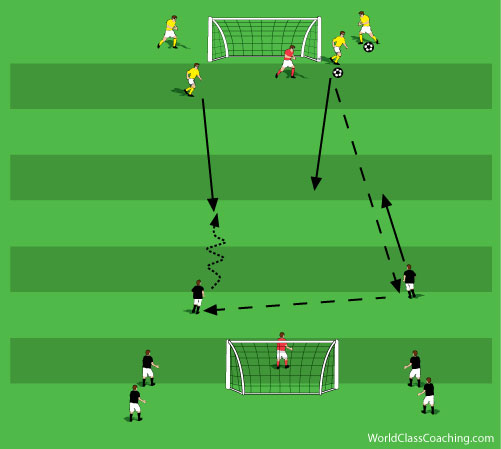 The player play 2 v 2 without restriction. They are instructed to look for opportunities to complete overlaps.

We again finish with an endzone game. I look to see if the players are correctly taking advantage of opportunities to complete overlaps.

We use triangle passing as our technical warm-up for this session again. After passing to the right and left and making sure that the players were making good passes I give them the freedom to open up and pass, check to the ball for a give-and-go or turn with their back to pressure around the ‘defender’. 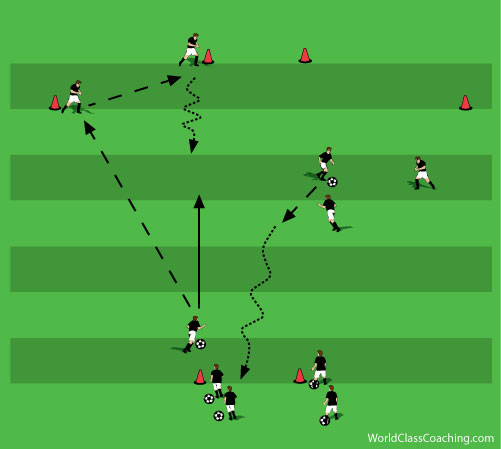 We return to this passing pattern and review the give-and-go and overlap before I give them the choice. They can perform either combination play. The decision is made by the outside player who receives the ball from the defender. They tell their teammate to, ‘Hold It’ or ‘Go at Him’. This tells his teammate what he is looking for. 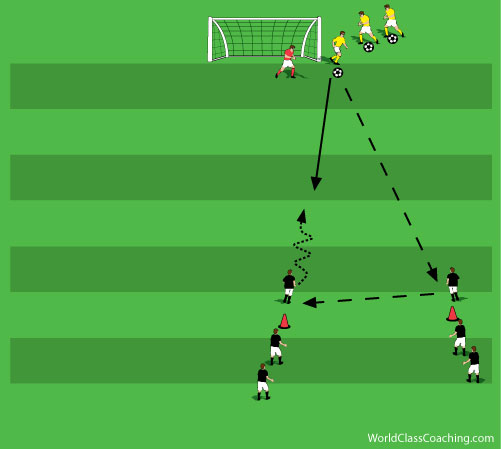 As with the passing pattern, the player with the ball decides whether to perform a give-and-go or overlap by telling his teammate what to do. Now the dribbler has to decide whether to pass it to the supporting player or take the space that the defender is giving him.

The players now have all of the tools to decide what to do. I let the exercise flow freely and coach within it but not by stopping the action unless the same mistake is being made by multiple players.

These are very technical sessions that involve a great deal of dribbling, passing and shooting. The exercises provide a great environment to teach the key factors necessary for effective combination play. Once the players understand the keys then it becomes all about decision making; what to do, when to do it and whether or not they should change their mind depending on what the defender is doing.

These sessions will teach the combination plays but will also give your players the tools to make good soccer decisions during the game. 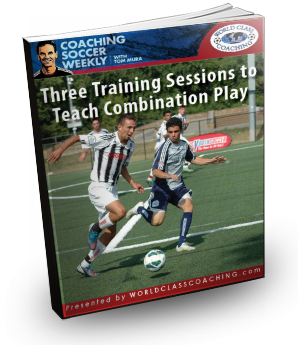 Putting combination and finishing skills together in front of goal makes the shots more realistic and gets the players looking for these opportunities in the game. Next week I’ll share my favorite finishing activities that involve combination play.