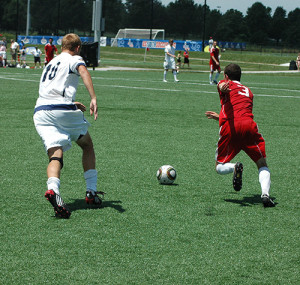 Our Instagram Account now has more than 900 followers. We’ve posted more than 100 images including exercises, drills and small-sided games. The posts from each week are from a section of one of our books. Sometimes they are a complete training session other times they’re a number of activities from one section.

If you haven’t checked it out already I would suggest you take a look because there are more diagrams of exercises ,along with detail descriptions, posted there than there are in many books that you can find.

We’re now in the middle of Inter-Club evaluations for all of our teams. It’s important that we pull all of the player together that have been playing in two different age groups but will be trying out together in a few months.

I also start to review the progress of my teams at this time of year since we only have about four weeks left in the spring season. It’s important for me to understand what has worked and what can be improved in the process I’ve used to develop the players on my teams. 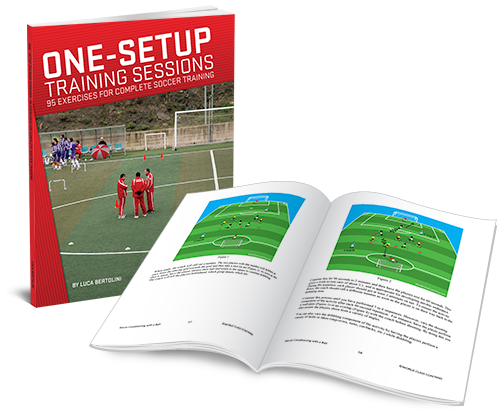 I’ve been implementing many of the ideas from one of our most recent books, One-Setup Soccer Training. The book includes 95 training sessions that are all structured around one simple field setup. This means that there isn’t any time wasted moving cones and goals for each drill or game. But more importantly using one setup allows the players to see how each activity builds on the previous one and connects to actual game situations that the player will have to deal with.

In addition to using sessions from the book I’ve also started to structure my own sessions around one field setup and I think it’s really helped my players understand not only what we’re doing but why we’re doing it.

There are certain topic that I don’t think are covered often enough. I’ve mentioned some others in previous episodes including, turning, arial receiving and others.

This week I want to highlight another area that you might think you’re training when you work on dribbling but you’re not. The key components are different and you need to teach them specifically for the player to be able to apply them to game situations.

This is a complete training session from warm-up through small-sided game that provides so many opportunities for repletion that it will have your players more comfortable and confident in this area after only one session.

I see a lot of training sessions focused on dribbling but hardly any on running with the ball. There are a number of differences between dribbling a ball and running with a ball: the ball is touched farther away from the feet, the surfaces of the foot that are used are different and the goal is speed rather than close control.

Teaching players how to run with the ball will make them more effective in important game situations. Players in wide areas will often find themselves with room to run down the line. Defenders who have just won possession will sometimes have space to run into in order to start a counter attack. Forwards will get in behind the defense and have the opportunity to run with the ball to goal.

I’m sure your players have found themselves in these situations only to move too slowly and be caught from behind or go so fast that they lose control and give the ball away.

This session will help your players know what it’s like to be in these situations and give them the ability to of having success when they have the chance to run with the in your next game. 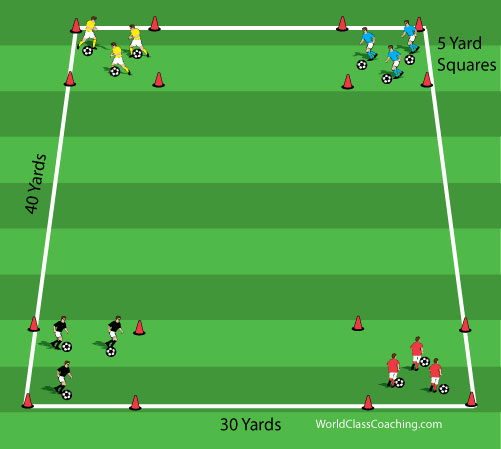 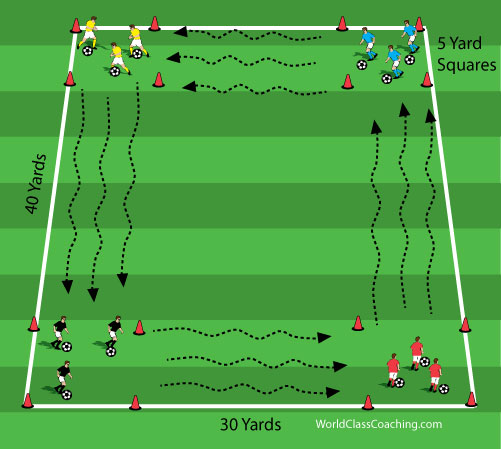 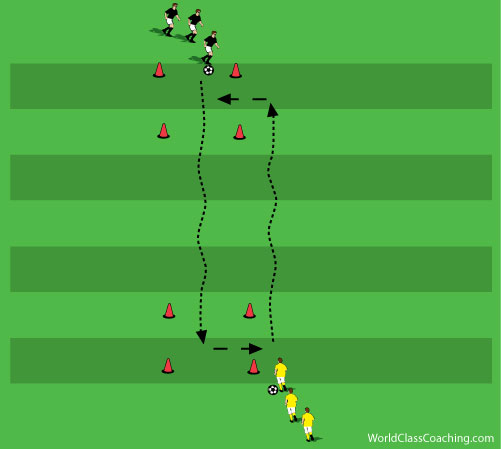 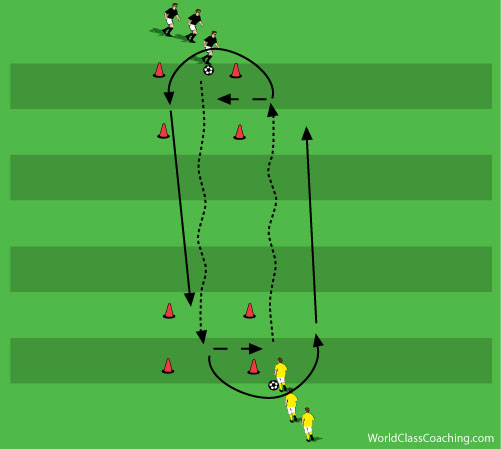 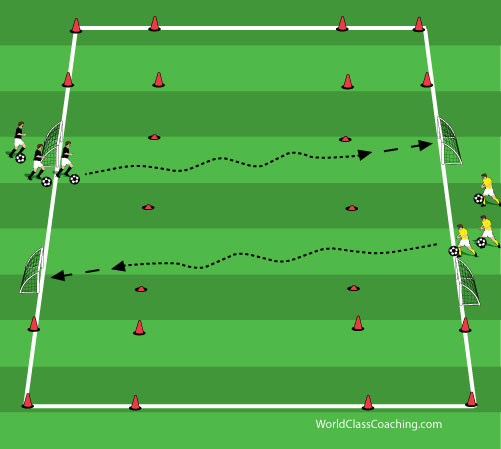 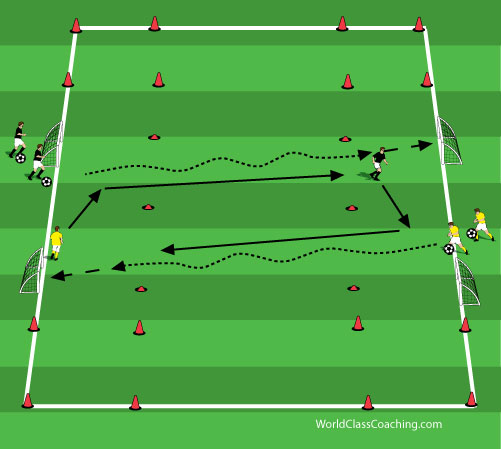 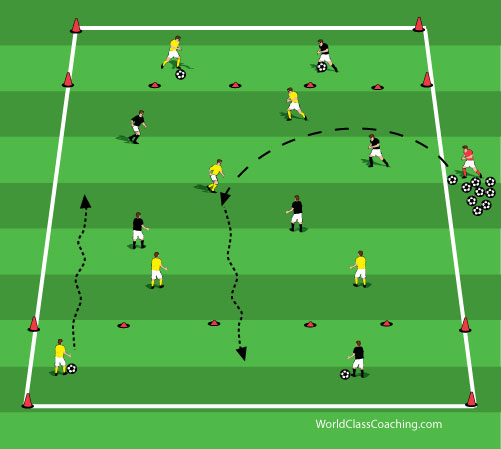 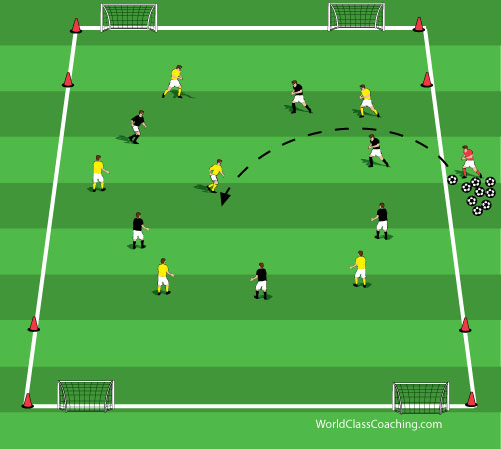 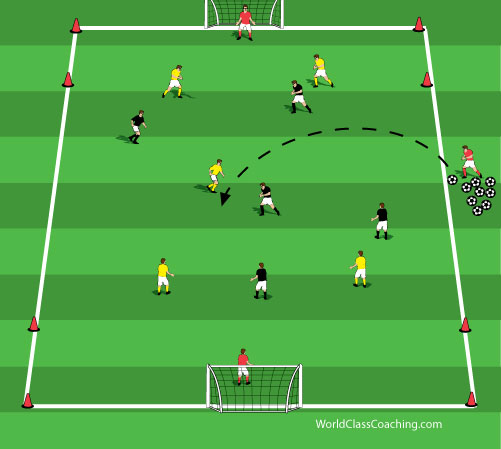 This session will provide your players with lots of opportunities to run with the ball and understand the key factors that will increase their effectiveness when they face these situations in the game. 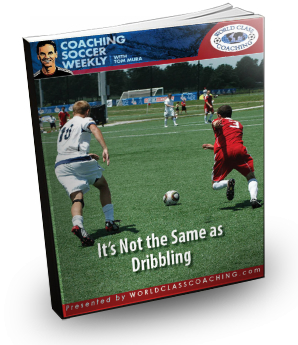 You can now subscribe through Google Play Music to listen to the podcast on your Android device.

Next week I’m going to look at formations you can use for teams playing 7 v 7 and how you can train your team to use them. With the new formats coming for next year I’ve had a number of coaches email me about this topic so I thought it was a good time to go over it.