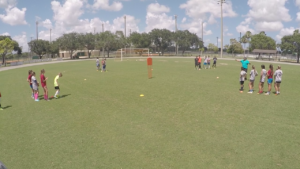 I had a fantastic week in Florida. It was actually a break from the heat we’ve had back here in Kansas City. I talk about my takeaways from the week and give you a sample CogiTraining session during this episode. You can also find the diagrams and descriptions in the Show Notes.

But first I look at last week’s controversy at USYS Nationals. I describe all of the details in the episode but the basic facts are that in the U18 G game between Carlsbad Elite (CA) and Ambassadors FC (OH) both teams basically walked their way through the game on the way to a tie that put both teams into the semi-final. Carlsbad was through unless they lost the game 4-0 or worse but Ambassadors needed a tie or the team from Syracuse could go through.

There’s a link to a short video from the game in the Show Notes where you can see what the game looked like toward the end.

The Ambassador’s coach said the game was not ‘Fixed’ and started as usual but as the game went on both teams stopped pressing. It was very hot and there had been players collapsing the day before. With no reason to push forward both teams just sat back and were happy to just see the game out.

US Youth Soccer said that they’re looking into the matter and fines and/or sanctions may be imposed. In case you wondered, neither team won the tournament. Tennessee SC beat Ambassadors in the semi and Carlsbad in the Final

This is a tough one in some ways because I understand the desire to rest your players because you know you’re already through to the semi-final but this was not a meaningless game to the girls from Syracuse. They were robbed of the opportunity to go through and that does seem unfair.

As I said, last week was very educational. Today I share some of what I learned about CogiTraining. It’s a training method that is based on educational principles and the science behind how we learn.

Check out the Show Notes for a sample CogiTraining Session and links to the video I mentioned. 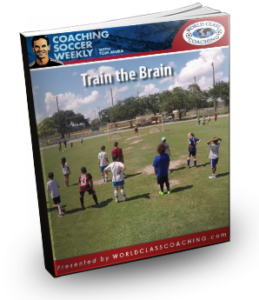 In upcoming episodes I’ll share the training sessions I’m using with my teams to prepare for the fall season that’s starting soon as well as some interviews that I’ve lined up that I think you’re really going to enjoy.