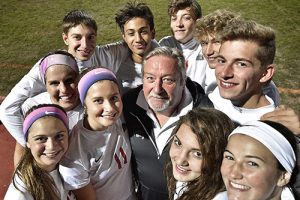 This week is the two years anniversary of the podcast! It’s hard to believe I’ve produced 93 different episodes in that time. I really appreciate everyone that listens to the show each week. If this is the first episode you’ve hear, WELCOME! If you’ve been here from the start then THANKS!

This week my teams started the spring season with an outdoor tournament. The weather was a bit rough but it was great to get back outdoors playing the full-sided game again.

It always takes the teams a few games to get used to the larger space again so getting three or four games in over a weekend is a great way to jumpstart the season.

Our league has moved back to larger fields for the 7 v 7 games so it’s interesting to see the player manage the larger space. I like the way it has opened up the game but I think they may actually be a bit TOO LARGE.  But it’s definitely an improvement over the fall so I’m not going to complain too much.

This week’s question is from Sammy and he’s asking about developing a set core set of exercises.

“The coaches I read and listen to suggest that developing a “coaching core” of 10-20 exercises that you’re doing all the time is far more valuable for player development than having 150 activities in your coaching Rolodex that you may pull out once a season. I’ve been trying some new things this season and trying to narrow the activities I do to what I consider “the essentials”.

My question is 2 fold: 1) Is this true in your opinion, and 2) if narrowing your activities into a coaching core is advisable, what are some rules of thumb for coaches looking to develop a solid coaching core?”

Thanks for the question Sammy

I said, “I agree that you should have a set of core activities that you use so that you’re not constantly teaching the exercise instead of the techniques and tactics but I also think that you should also add different ways of training occasionally to keep it fresh for your players.

I think you should identify the areas you want to focus on given the age and ability level of the players and build your core exercises around those topics. They will change as the team develops but you’ll always want to cover the key areas of possession, 1v1, finishing, defending, and combination play.”

I’ve been coaching both boys and girls teams for many years. I’m often asked how they’re different and which I prefer. I’ve always dealt with them differently and I’ll share those differences with you today.

I also came across a great article while researching more information on this today that I think you’ll find very interesting. It confirms much of what I thought was true but I couldn’t tell you why it was.

Here’s a link to that article.

I have a number of topics that I’m working on for future episodes but I haven’t settled on one for next week. Follow WORLD CLASS COACHING on Twitter for an update the week of the show.