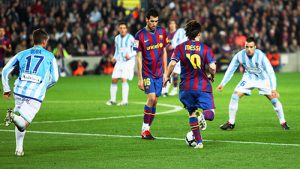 I had another tournament with some of my teams last weekend. It’s been a crowded schedule lately which I think contributed to a slow start for a couple of teams. I could tell early on that they just weren’t up for it the way that they usually are. They just weren’t competing with the other team. They were trying to do the right things but the intensity level wasn’t there. Once we talked about it at halftime I saw a steady improvement throughout the weekend.

It was a great reminder that you can’t just look at the game as a technical and tactical exercise; it’s also an individual and team competition. You have to fight to impose your will on the game or the other team will be successful in imposing their’s.

This week’s question comes from Nick

He asks a question about motivating performance in training.

“What do you use, if anything, as the reward or punishment for winners and losers when doing drills, SSGs or scrimmages during practice to encourage the most effort and competitiveness from players?

In the past we would have the losing side run (maybe across the field and back) or do something like jumping jacks but I never got the results I wanted. Either the girls enjoyed the “punishment” or there were hurt feelings and a negative vibe to the activity that I didn’t like. I just want to give them a reason to care if the “other team” scores on them at practice. Any thoughts are appreciated.”

I hardly ever impose any punishment for losing an ssg or other competition. I want the players to focus on the satisfaction they get from being successful rather than the consequences of losing. If I do anything I’ll say that the losing team has to pick up the cones or put the goals away.

In general, I don’t like using conditioning as punishment. I don’t want to foster the idea that fitness activities should be viewed negatively.

My suggestion would be to praise the winners for their hard work and skill rather than punish the losers.

There’s a common term in coaching that relates to many different sports. You’ll often hear coaches warn against, “Ball Watching”. If you’re only watching the ball then you’re missing a huge amount of information that can help you make decisions.

Today I’ll share some ways that you can train your players to look around the field and gather all of the information they can before they get the ball so that they can make better choices once they have it. 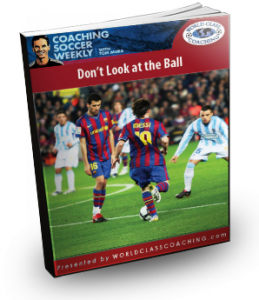 Next week I’ll look at the tug of war between the US Development Academies and High School soccer that has many players struggling to make the right choice for themselves.