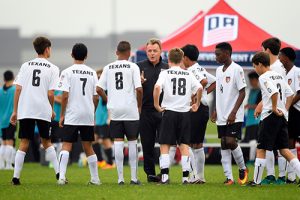 With one of my teams last weekend I decided not to coach while the ball was in play. The team had played a tournament the previous weekend and they had heard enough from me :-). I wanted them to take total ownership of the game and make their own decisions whenever the ball was in play. I also didn’t want to break their focus on the game so I stayed out of their way.

This is something I’ve done in the past but not with this team so it seemed like a great time to try it right after a long weekend tournament. If you haven’t tried this with your own team then I would highly recommend it. You will learn more about your players and they’ll feel more empowered to take control of the game.

This week’s question comes from Kevin. He asks a question about teaching positioning.

Kevin described his team and then says,

“One thing that I have focused on, along with our DOC, is to let the girls be “free to play” rather than tie them and restrict them to specific part of the field. What we often see, especially in our rec league, is players in a Right Back position basically never leaving a 10 x 10 area. I have seen Backs playing 25 yards from any other player, just to stay in that area. I’m just curious what you think about this issue.

Admittedly, my girls get WAY out of position at times due to the freedom that I give them, but I’d rather them be in the play than way out of the play.”

I think there’s a middle ground between strict positioning on the field and a total free-for-all. It takes time but you can teach the players at this age about how positions relate to each other and how they can create open space on the field.

There’s a tug of war currently underway in the US. It’s between the US Development Academy and High School sports. We place a lot of importance on high school sports in the US. Many other countries do not. With year round club soccer becoming more wide spread, players at the top end have to choose between playing at the highest club level or playing for their high school team.

Today I look at why this is happening and how players can navigate this dilemma to choose what’s best for them.

Next week I’ll discuss the idea of ‘Silent Saturdays’ that has been used in many areas in an attempt to give the game back to the players.