#135 Training Players to Move Individually and as a Team 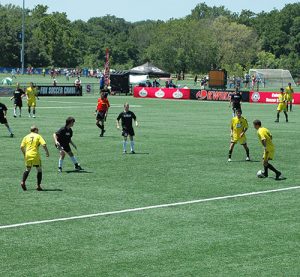 We’re starting to wrap up our Futsal season. I’m continuing to work on technical skills that will help the players in Futsal but I’m starting to plan for the transition back to outdoor. I’ll talk about that more in the coming weeks.

We wrapped up a three week MicroCycle where we did a progression of fast footwork and change of direction moves.

This last week we did mostly 1 v 1 between two dots. The dribbler tries to fake the defender and get to one of the two dots before they do. If they do, they get one point. After 30 seconds the players change roles. The player with the most points after they’ve both attacked wins the round.

There’s a ‘ladder’ setup where the winner moves forward and the loser moves back. The players love it because it’s competitive and I love it because they get to use the fast footwork skills under pressure.

This week’s question comes from Sammy Grantham. Sammy is a longtime listener and I interviewed him back on episode 102 about Differentiated Coaching.

“There was a podcast you did a year or two ago and you were discussing different types of training sessions. You mentioned the whole-part-whole method. It was briefly discussed in a coaching course I took a couple of years ago, but it almost seemed like the instructor hit on the topic because it was part of the course curriculum and moved on. There wasn’t a lot of detail.

I have a cursory idea of what it is. I’ve done some googling and amazingly little. I was wondering, is the whole-part-whole method something you use much? If so, could you give some examples of sessions you’ve ran.”

Thanks for the question Sammy!

It’s my understanding that the Whole-Part-Whole method is going to be used in the new Grassroots Pathway courses. They’re calling it Play-Practice-Play.

I’ve been asked to be a Coach Educator for the new courses so I’ll let you know more about the curriculum in the future.

I told Sammy that, I use it more in the spring than the fall because I can use it to see what I topics I need to return to.

An example would be playing a four-goal small-sided game and see how the players perform. If they fail to recognize the opportunities to switch the ball because they are facing the ball and not opening up and looking away from the ball then I would do an activity to work on this area. I’d use something like a diamond passing drill to work on opening up and then a possession game where team keeps the ball in one area and then switches it after a certain number of passes or certain amount of time. Then I’d return to the four goal game or similar game to see how the players perform.

This week I want to revisit Episode 14 Do Your Players Move Without the Ball? I think it covers an important topic in a way that makes it easy for even young players to learn how to move to receive the ball. 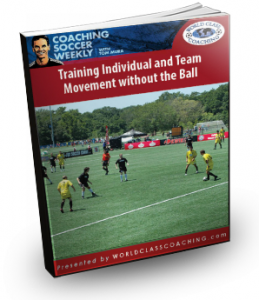 Next week I’ll look at is and isn’t acceptable sideline behavior for a coach.