#136 The Responsibilities of an Effective Coach 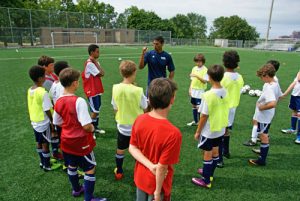 For three weeks I’ve focused on fast footwork and lateral movement with my players. It’s been great to see their increased on comfort and confidence on the ball. Each practice I’ve given them ‘homework’ to do that related to the movements we did during training. Hopefully they’ll continue to do these exercises at home so that their development in this area will not stop with this MicroCycle.

In the last two weeks of the season we’ll be focusing on playing a lot of attack vs defense. I’ll talk more about that next week.

“My question involves setting individual goals for my players. I am the coach of a competitive u14 girl’s team in Madison, WI. We compete in our city league which involves travel around the county and sometimes to other parts of the state for tournaments. It is a mix of commitment levels, some who will be there every week, do extra trainings, etc. and some who are involved in multiple sports (which is great of course) but soccer may not be their priority.

At the beginning of every season, I usually have my players set goals for themselves. Where I run into issues is helping them to maintain those goals. As you know, coaches have so much to do in so little time that I just don’t have enough time to sit down with every player and put on a good session. Before I know it, it’s the end of the season and we haven’t talked about goals again.

This is a broad topic and a broad question but any advice you might have on creating and maintaining effective goals would be greatly appreciated.”

I think it’s our responsibility as coaches to help players understand the importance of goals, teach them how to set them and help them work to reach them but the responsibility is on the player to follow through. It sounds to me like you’ve done the work to put your players in the right position to continue to develop but as you rightly point out, there’s only so much time we have as coaches.

The most I think we can do is touch base with the players midway through the year and then at the end to ask about their goals and how they think they’re coming along.

This is why I think training at home is such a key element in player development at the club level. They have to be working on their own if they have the goal of reaching their potential.

This week I talk about effective coaching behavior.  There are three areas that I’ll discuss: Practice, Games and away from the field. Each of these areas has an effect on the development of your players and I think you should have a plan for how you deal with each of them.

I really appreciate everyone who takes the time to leave a comment on CoachingSoccerWeekly.com or emails me a question. Reading these questions and comments makes me think about my own coaching methods and give me great ideas for future episodes.

Next week I’ll share how I’m using Attack vs Defense situations to train my teams toward the end of our Futsal season.