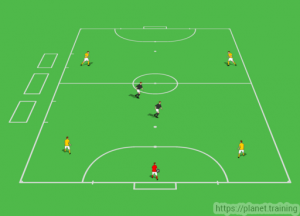 This weekend is the US Youth Futsal National that are held here in the KC area. I have one team in the tournament and I’m looking forward to seeing how they do against some very good opposition. It’s great to finish up the season with an event like this. It lets me see how far we’ve come and gives me ideas on how to improve in the future.

Last year we were down a goal and the other team packed it into a tight diamond. We couldn’t break them down. This year we’ve worked on using a ‘Fly Keeper’ or ‘Fifth Attacker’ Done it in training and in games where the score wasn’t in question. Hopefully we don’t need to use this tactic but with the quality of the teams we’re playing I think we probably will. I’ll let you know how it goes next week.

This week’s question comes from Kacey. He’s asking about playing against a very physical and aggressive team.

“We are playing a very dirty team in our state cup match next week. Last time we played there was tripping, elbows, very rough play and taunting by the coach and players. My U10 boys were not ready for this the last time we played and did not fare well. This might not happen due to the state cup games having three refs who are competent, compared to the usual U10 ref who is just starting out there.

What’s your advice in preparing the boys for a game like this in terms of dealing with the dirty play? I will not tolerate our team playing that way. We are a very different team from when we played last, so our physicality is way up, but I just don’t want to see the game spiral out of control. We can beat them if they don’t get in our heads with all the fouls and such.”

Thanks for the question Kacey!

My suggestion is to prepare your players to play, “Tough but Fair”. This is a phrase I borrowed from another local coach because it describes how I always want my players to act.

You can’t control how the other team, or it’s coach, will act and you never know what the referee will call. All you can worry about is focusing your players on competing hard but within the spirit of the game.

If you win, you and the boys will have a victory to be proud of but if you lose at least you will lose while playing the game as it should be played.

I want to share the training session I’ve been using to bring together all of the concepts we’ve worked on this winter. This Attack vs Defense game requires the players to use the techniques and tactics they’ve learned but most importantly they have to make decisions about what the defenders are giving them and what they’re taking away.

I said it last week but I really appreciate everyone who takes the time to leave a comment on CoachingSoccerWeekly.com or emails me a question. I received some great feedback and questions this week. Keep’em coming!

Next week I’ll share what I’m doing with my teams to transition from winter Futsal indoor back to outdoor soccer.