#190 Owning Your Development with Yael Averbuch 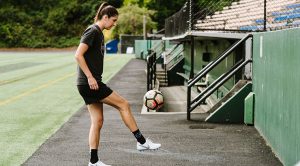 We’re starting to wind down the 2018-19 soccer year. This is the last week of practice for one of my teams while the other two just have one tournament left for each of them.

I’m always surprised at how fast the spring season goes. It’s no shorter than the fall but it just seems to move so quickly. It may be because we’re in the process of planning the tryouts and looking toward next fall already.

During this time of year I do a lot of multi-themed sessions and the Play – Practice – Play model. We’re not really looking to develop new skills and abilities. I want to pull everything that we’ve done during the year into the preparation for these last tournaments.

In a couple of weeks we’ll be right back into tryouts!

Today’s question comes from Sammy. He’s asking what players in his area do when a player gets injured during a game.

“I live in Mobile, Alabama and this is a “thing” in the South. When a player is injured, the players usually will kneel in respect for the player that is hurt. Does that happen all over the country? Or is it just in the American South?

I get the sentiment, I just personally don’t like it. Mainly because if I’m a 13 year old boy, I’m probably embarrassed about the fact that I’m hurt and I want to imagine that no one is looking at me, even though I know everyone is looking at me, I certainly don’t want my team mates to punctuate my embarrassment by taking up an unusual posture as a result. Also, I worry about cramping when the players get up.

Heres the problem: as a coach, I look like a jerk if I tell my players not to kneel, when in fact it’s the respect for the players injury that makes me to give him any privacy we can provide.

I’d prefer to just have both teams trot to the sideline and get a sip of water and turn their backs to the situation and give the professionals their moment to intervene.

What are your thoughts? “

Thanks for the question as always Sammy!

I’ve always disliked it when players kneel when someone is injured. It seems to happen less here as the level of play increases. I’ve called my players over at times to, as you say, let the coach or trainer deal with the situation. I always do that if the injury is serious.

Reacting to this can be tricky. I know I’m not trying to be dismissive or disrespectful. I can’t control how someone reacts so I don’t worry too much about it.

The real problem comes in when everyone else is doing it and you are breaking the social norm to do something else.

Last week I had a great conversation with Yael Averbuch. We covered so much ground that I decided to divide our talk into two episodes. This week we talk about the story of her development into collegiate National Champion, Professional Player and frequent National Team Player. We also discuss high school vs DA Soccer, girls playing with boys and a number of other interesting topics.

Next week I’ll bring you the second half my conversation with Yael where we talk about the resource that she’s created to give players of all ages the opportunity to control the one thing they can in the game – their ability with the ball.