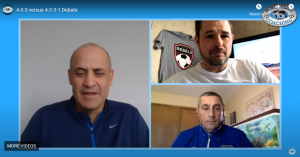 I’ve just finished my third week of ‘Social Distancing Practice’. To be honest, I’m really missing high fives and pats on the shoulder. I didn’t realize how much those simple acts helped me connect with players. Nothing can really replace those. We tried, ‘foot fives’ but those seem awkward and forced. It may not happen for a while but I can’t wait until I can high-five my players again.

That time seems to be moving further away now that schools in Kansas won’t be starting until after Labor Day. In a way, it’s a return to the old days because when I was growing up we never started back to school before then but that changed slowly over time. Now I’m starting to get questions about what this means for the start of the soccer season. The honest answer is that I don’t know. The Governor is supposed to make the official announcement of the Executive Order on Monday so we may know more then.

I’m far from an expert but I think that having kids in school all day should be looked at differently had having them outside being active for a couple of hours. Yes, we should take precautions but surely the risk is greater in a school than it is on a field. (Stepping down from soapbox)

Today I’ll share a conversation I that I had with a coach who looks at the game from unique perspective. I’m talking to Liam Shannon about the connection he’s made between a 2,400 year old military treaties and soccer.

Here’s a link to Sun Tzu Soccer on Amazon.