#253 Encourage Creativity and Confidence in Your Players 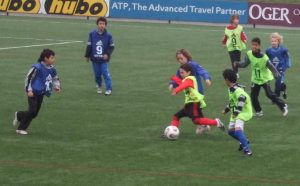 One of the benefits of coaching as many teams as I do is that I see just about every situation you can imagine. Last weekend I had eight games from Friday through Sunday. Two games Friday, two Saturday and 4 on Sunday. Today I thought I’d pull out one takeaway that I had from each day.

On Friday one of my teams had an opponent that relied almost exclusively on aggression and physicality to play the game. Their goal was to simply to force us into mistakes that they would try to take advantage of. When they did get possession the ball was kicked forward and chased down. If we won it then they hoped to pressure us into coughing it up on our half so they could shot.

I know that I am a ‘coaching snob’; I think that kids should be taught to play the game positively with creativity and flair. I accept that not everyone feels that way. At the highest level you need to play games to get results at times but NOT AT U11! It drives me crazy to play against teams like these. Beat my teams with good soccer and I’ll tell you, ‘Good Game!’ and try to learn from the experience but play for a result at U11 and you will not have my respect. I’m sure the coach didn’t care if he had my respect or not. I can only hope that the parents (at least some of them) on the other team recognized the difference in approach and get their daughter in a program that focuses on player development and not game results.

Tune into this episode to hear my takeaways from Saturday and Sunday.

Today’s question comes from Rick. He’s asking about how I choose which player will take a PK

“My questions is around the selection of who takes a PK. My approach to PK’s is that this is a set piece situation, and I like to address all duties, roles, and responsibilities ahead of our games so that players can take this into account in their pre game preparation.

I usually say that whoever is in the striker position at the time that the PK is awarded is to take the kick, although I’m thinking of rotating this duty.

I recently had a parent (who is also an assistant coach), suggest that the player to take it should be the player that drew the foul as a reward for their hard work.  The top clubs never do this but maybe this is a better approach for this age group? I’d appreciate your thoughts?”

That’s a great question. So many coaches do it differently. I’ll often have the player who was fouled take it. This is especially true if they had a clear chance to score and that was taken away. An exception to that would be if the player was hurt or at all shaken up by the foul. I don’t want someone that is overly emotional not feeling 100% taking on that pressure. If a player is fouled I may ask them if they want it. Sometimes they do and other times they hand it off to a teammate.

As the teams get older or the situation is more critical (tournament final) I’ll pick the player that I feel has the best chance to score. We do penalty kick games in practice but I also take into account the mentality of the player.

Sometimes I’ll just tell the players on the field to decide. Depending on the age and maturity level of the team this can work well. The more decisions we let the players make the better.

I’ve never rotated the responsibility around an entire team but I can see how that would be a good idea at the younger ages. It would give all of the players a chance to have that experience.

PLAYR By Catapult is a soccer GPS tracker and training app, designed for every soccer player who wants to learn how they can improve their game.

Powered with technology used by Real Madrid, Chelsea, Ajax, Bayern Munich, and more of the world’s elite soccer clubs. PLAYR uses GPS technology to track your performance on the key soccer specific metrics defined by sports scientists including total distance, sprint distance, top speed, power, load and intensity. But we all know stats don’t mean anything without action, and this is where the PLAYR app really adds value. PLAYR provides personalized targets for training and matches optimizing effort and intensity to help you perform at your peak.

After each session, speed up recovery with tips designed by top Premier League coaches. Plus review heat map and trend data to see progression across the core metrics.

If you’re a player, coach, or parent looking for a tool to help take your soccer to the next level, then PLAYR by Catapult is for you.

As coaches I’m sure that we all spend a great deal of time planning how we will address technical and tactical aspects of the game but how much time do we spend thinking how we are encouraging our players to be confident and creative? This week I’ll share how you can use four concepts to have an instant positive impact on the mentality of your players.

I’m working on a few ideas for next week’s podcast. I’m not sure which one I’m going to finish up for next week so you’ll have to tune in to find out.