#272 – The power of mastering your session 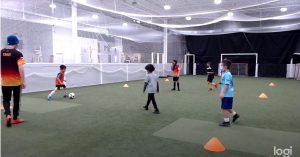 Entertaining educational and inspiring content to help make you a more effective player, coach, or soccer parent.
Hello, and welcome back to coaching soccer weekly presented by World Class coaching. I hope you liked the new intro song, it took me a while to find it. And I settled on this as the intro. So this is going to be our intro moving forward, and I’m super excited about it.

Well, things aren’t getting much better in Ontario, we are in our third lockdown, and it’s not looking like we’re going to be back on the field anytime soon. Unfortunately, as you heard in last week’s podcast, we are all online and we do our workouts and our ball mastery sessions all online. What I’ve added recently was a watch party session. And in Ontario, and in Canada, really the only way we can consume English Premier League content is through a streaming service called the zone. So what I like to do is, when there is a game on that I think would be interesting for players and a team that has similar playing style as us, I’ll be able to stream that through zoom. And what’s really great is I like to stop the game at certain points. And I can edit what I see for the players with the drawing tool on zoom. So we can pause the game, all circle, either a player with the ball or without the ball. And then I’ll make three arrows, two arrows, whatever that is, and then I’ll have the players take a poll on what they think that player should do. And then the players will be able to defend kind of their position on which one of the situations they think is the right one.

Hot Topics
I think it’s been really great for the players. And most importantly, the players actually really enjoy it. They enjoy putting themselves in the shoes of a professional player. And it’s been a lot of fun.
I’m really excited to create a new segment here on coaching soccer weekly, and I’m going to call it hot topics. Now hot topics is going to be a short segment at the beginning of the show, usually after me kind of reviewing what went on last weekend. And what it is, it’s going to be a quick way for me to get across some information that’s going on in the Soccer World. Now, that could be something that’s happening in the professional game, that could be new coaching methodologies, or trends, or even a new technology, just something that I think you’ll find value in. And today, what I want to talk about from my hot topic is the Champions League. The start and fall of the European Super League isn’t really worth mentioning. So I’m not going to talk about that. But what I will talk about is that through that whole situation, we found out that there is going to be a New Champions League format. So here are four quick points of things that you need to know about the New Champions League format. The first point is that the New Champions League format is only going to come into effect in the year 2024. So right now we’re in 2021. So if you are listening in 2025, then these changes have already started.
The second point is that the 32 teams, which is what we currently have, are going to extend to 36 teams. And there’s also with that point to important points about how that’s going to work in that 36 team expansion. So the first part of that is that the group stages are going to be replaced by a league, but you only play 10 of the teams once. So you’re only playing 10 teams, and you’re just playing them once. Now, two teams who didn’t qualify through their domestic league. So for example, let’s talk about the English Premier League and have the highest UEFA coefficient, which is essentially UEFA is ranking system, they’ll qualify and back to the English Premier League that would have been Arsenal and spurs. So to be honest, I’m not sure how the youwave coefficient works, but the two highest ranked will be moving into the Champions League as well. The next important point is that the top eight teams qualify for the last 16 and teams who finished ninth to 24th will play a two legged playoff tie to progress and the last point is that from the last 16 to the final, everything is going to be the same. So it’s what we’re used to seeing right now in the Champions League. So hopefully you like that hot topics segment. It’s just another way that I can get you information about what’s going on in the Soccer World. And I really think you’ll enjoy it moving forward.

How to Master your session

Mastering our session is so important to the development of our players. Imagine if a teacher ran one multiplication class and expected their students to fully understand multiplication after that. It just doesn’t make sense. But I want to know your thoughts. How important do you think mastering each session should be and should more coaches make it a priority. You can share your thoughts in the comments section in Episode 272 coaching soccer weekly.com or share them with me through my Instagram which will be listed below in the show notes. And also you can check out my content on YouTube to see what I’m doing with my teams at Gladiator Soccer Academy, and that’ll be in the show notes as well. Thanks again for listening and I hope to see you next week.