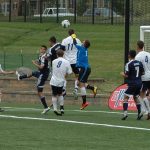 I had three teams in a tournament last weekend. As with all early season tournaments in KC it was HOT. Two of my teams were playing in their own age group and one was playing up. The two playing on-age both made the final. One lost on PK's and the other won. I think the players learned some good lessons from the experience. You can listen to the episode for more details. The team that was playing up had an up and down weekend. At times we played great, at … END_OF_DOCUMENT_TOKEN_TO_BE_REPLACED