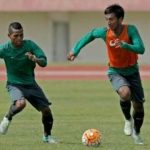 Last weekend I feel like I coached three great game and one awful one. The players weren't awful, it was me. I have a team that's playing up an age group and there were promoted to the first division after a very good fall season. The difference between DI and DII is substantial and it's been a difficult spring for the team. They played well in the first half this weekend and were up a goal at halftime. We talked about ways we could improve in the second … END_OF_DOCUMENT_TOKEN_TO_BE_REPLACED