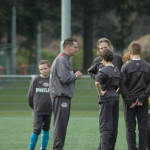 We were finally able to play some early season games last weekend. With the stops and starts we've had to our training during the late winter and early spring seasons it was hard to know what to expect. Add to that the fact that we were missing a number of players from each of my teams because they got a head start on their Spring Break trips. That gave us the opportunity to bring in some guest players from the teams below ours. The players we brought up did … END_OF_DOCUMENT_TOKEN_TO_BE_REPLACED