Thanks!
We continue to receive a lot of positive feedback on the podcast. 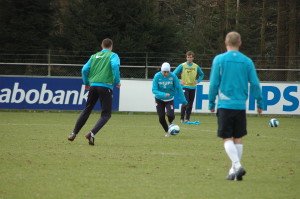 A ‘Five Star’ review on iTunes from ‘Flying Dave’ says, “I’m thoroughly enjoying this podcast. I find it hard to talk soccer coaching with other coaches. My wife is tired of me bouncing ideas off of her. I’m super pleased to hear about coaching from other coaches. thanks!”

Thanks for the review and rating Dave!

Another ‘Five Star’ review is from Arima 19 says, “Have been coaching for 20 years and this is a great vehicle for creating ideas and different ways of presenting your training sessions. When setting up your training sessions, you are likely by yourself and these podcasts act like a second coach to help customize your coaching ideas. Easy to understand with good back up diagrams. Well Done!”

While I really appreciate the kind words and positive feedback, this week I’m looking for something different. Please let me know if there’s something you don’t like about the show. Maybe something you’d suggest we change. Everything is fair game except the host, sorry, you’re stuck with me. 🙂

We want this coaching resource to be the best it possibly can be and if there’s something we can change to improve your experience, we want to try to do it.

You can leave your suggestions in the comments section below or email them to me at tommura@worldclasscoaching.com.

I take a look at possession play. My guess is that the most commonly used games by soccer coaches are possession games. This is especially true today with our love for all things possession related.

The challenge is to set up the game to applies enough pressure but not so much that the players don’t experience any success.

If it’s too easy then it doesn’t transfer to match situations. If it’s to hard then the players get frustrated.

The game below strikes a great balance between pressure and success because the pressure increases as the players become successful. This ‘self-regulating’ type of game ensures that the pressure is always challenging without being overwhelming.

Coaches often use possession games that have two teams of six or more players competing to keep the ball away from the other team. If the teams are having trouble keeping possession then they will add a neutral player or two in order to give the team with the ball a numerical advantage that will make it easier for them to keep the ball.

Usually this will be a non-directional game played in a large area. The number defenders involved make it difficult for players to see the shape of the game and connect passes successfully to move the ball away from pressure.

The following possession game is my favorite game of this type for any age group because it solves many of the issues that the ordinary possession games have. 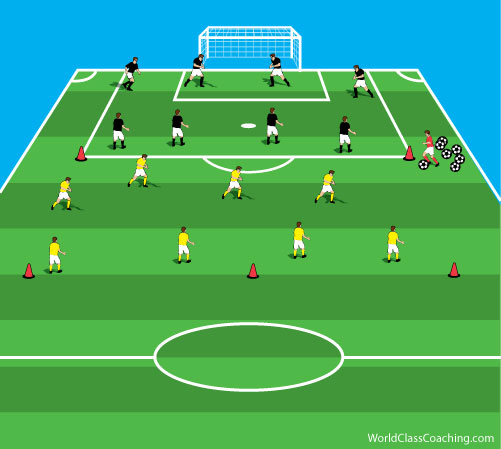 One team is on each side of the area. The coach has a supply of balls at the halfway line.

How the Game Works 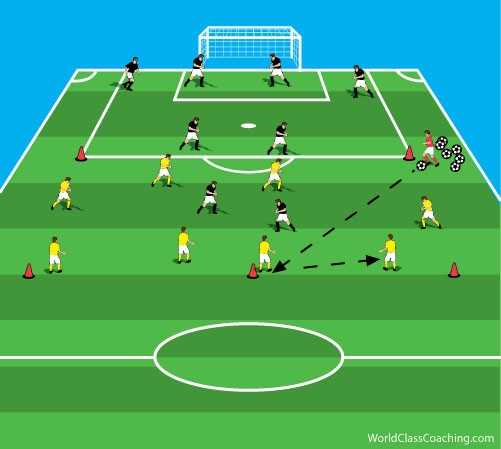 One team begins with the ball. The other team sends over two defenders. Five passes equals one point. 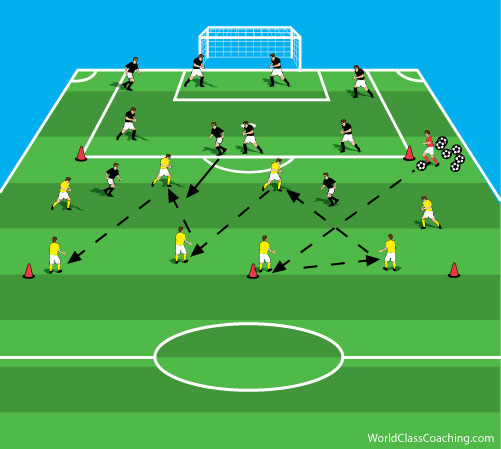 Have the players count the passes and points out loud so everyone is aware of the score. I have the players do this because ‘I’m coaching not counting’. I want to be free to give tips and make corrections as the game is being played without worrying about what the score is. Another defender enters the attacking area after each point is scored. 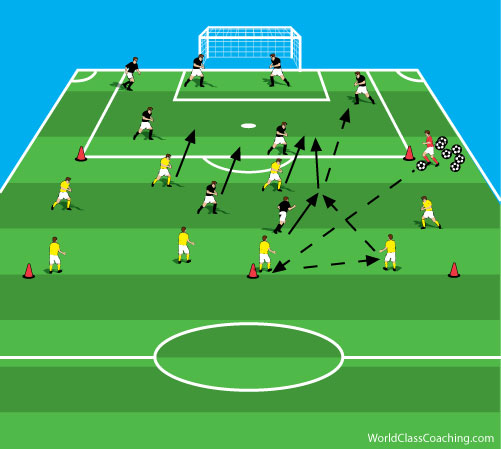 The defenders try to win the ball and move it back to their side of the field. If they do, the other team sends over two defenders. The teams organize who becomes the defenders. When the ball goes out of play the coach plays a new ball into whichever team should have possession.

You can control the pressure on the attackers by starting with fewer defenders. You could even start with NO defenders for the first five passes. With very young players you can have the defenders crawl like crabs or hop on one foot to defend.

With older or more experienced players you can allow them to leave one defender in the other team’s area. This will make transition more difficult and allow for immediate pressure.

Variation for Restart of Play

Another way to restart play when the balls goes out of play is to number the players. When the ball goes out the coach calls a number and those players race to the coach for a ball.

This creates the motivation for the defenders to work hard. It also provides an opportunity to teach pressure, cover and balance.

I feel that it’s important keep the game flowing and only coach within the game without stopping the action.

You can also give coaching points between rounds of play. Play until a team reaches a set number of points then give the players a break and discuss what can be done better. The play another round and focus on those coaching points during the flow of play.

As you can see this is a possession game that you can shape to fit the age and ability level of your players. Since the pressure is controlled by the amount of success they have the players will gain confidence quickly and the pressure will increase as they improve.

Finally, this is a great conditioning game that will improve the player’s fitness while they are also working on their technique and small group tactics. 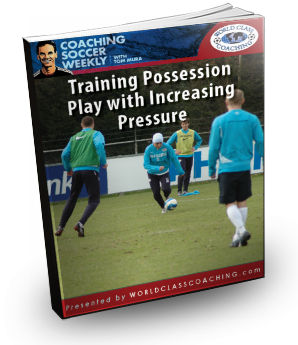 In next week’s episode I’ll share a complete training session inspired by the quick passing and combination play of Barcelona and Bayern Munich.